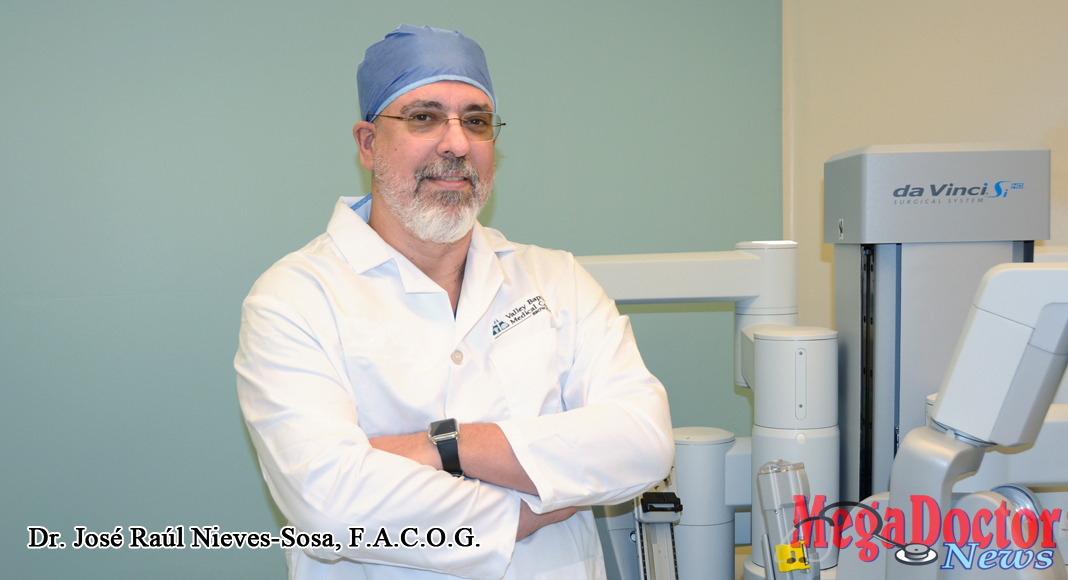 March 2017 is a special month, Dr. José Raúl Nieves-Sosa, F.A.C.O.G., a specialist in Obstetrics and Gynecology, was selected to be our Mega Doctor.

During our conversation with him, we’ve learned a lot from him. He is someone who is always looking for a way to better his services to serve his patients.

Dr. Nieves-Sosa also has an engineering degree, which he obtained before becoming a medical doctor. His feature story in this issue of Mega Doctor News opens a window to let us know there is a physician in constant evolution.

Last year, he was recognized with a national award related to robotic surgery. Dr. Nieves-Sosa is the Chairman of the Robotic Surgery/Minimally Invasive Gynecology Committee at Valley Baptist Medical Center in Brownsville.

This is big, and like he said, “this does not happen from one day to another”. There is a lot of dedication, passion and coordination among all the professionals that participate.

Mr. Gerardo Hernandez, a patient, is no longer among the 98,093 people on the kidney transplant waiting list. As the first patient to undergo kidney transplant surgery at Doctors Hospital at Renaissance Health System, Mr. Hernandez gained a new chance at life with the kidney he received from his daughter. More in this issue.

HIV Prevention: Physicians can block HIV spread with a little-known treatment — if they can identify high-risk patients and administer the treatment to them. The questions can be difficult for physicians to ask, however. The questions can be personal, and they can be awkward for a patient to answer; but they are necessary to determine whether a patient’s sexual behavior or drug use puts him or her at risk of contracting HIV (human immunodeficiency virus). More inside.

Mothers Are Dying: Mothers in Texas die more often during or after pregnancy than women in most other states, and a state task force is studying why. Based on analysis of maternal death data from calendar years 2011-2012, the task force found that… more inside.

Number One Researcher: The University of Texas Rio Grande Valley has named Dr. Sarah Williams-Blangero as the endowed chair of the H-E-B Distinguished Chair in Diabetes and Genomics for the South Texas Diabetes and Obesity Institute. There is an article dedicated to this topic.

I know that you will enjoy this issue!

Minimally Invasive OB/GYN Surgeon A Distinguished Professional of the Valley

The Eye Experts First in the RGV to Replace Cataract with Revolutionary Intraocular Lens, Brownsville