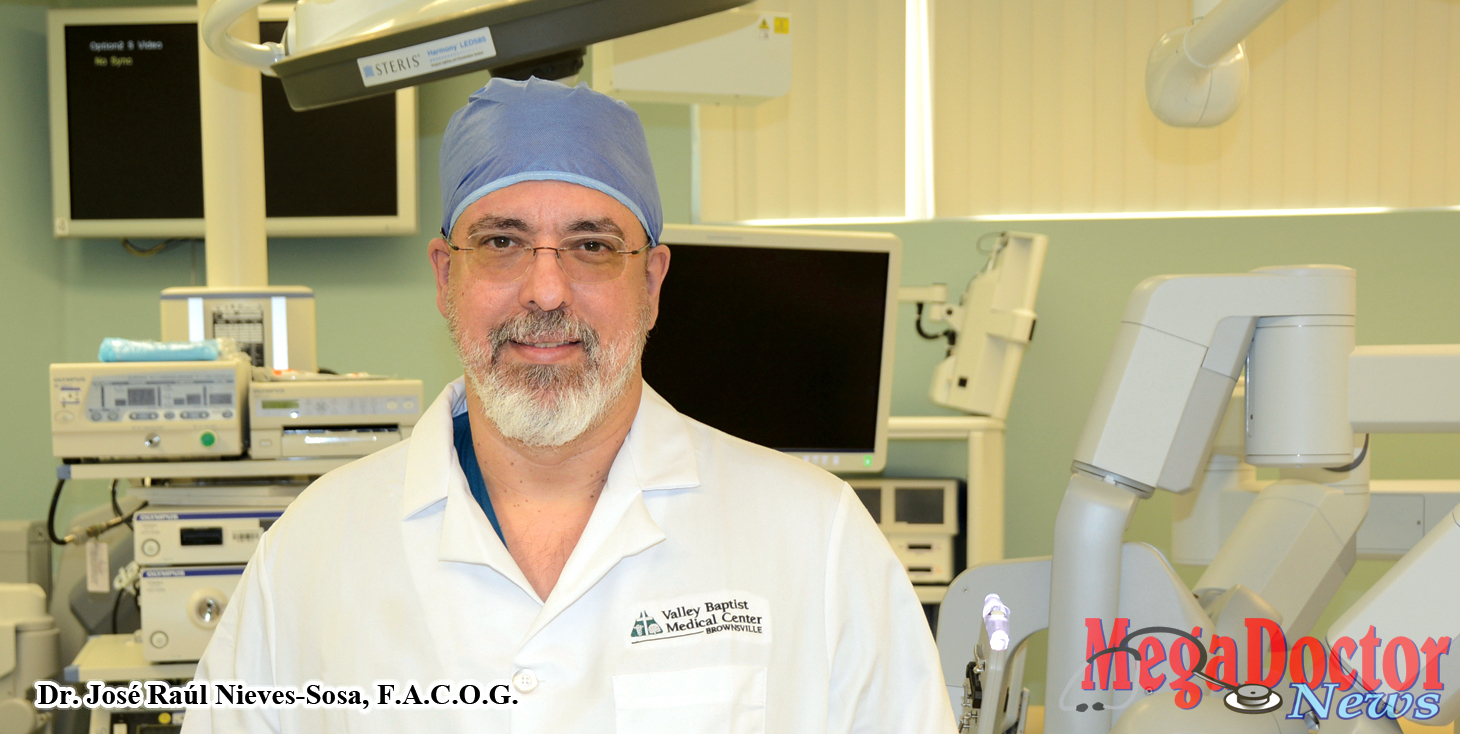 Dr. José Raúl Nieves-Sosa, F.A.C.O.G., a seasoned doctor in the field of Obstetrics and Gynecology, has been practicing for the last twenty-two years. Dr. Nieves-Sosa is also the Chairman of the Robotic Surgery/Minimally Invasive Gynecology Committee at Valley Baptist Medical Center (VBMC) in Brownsville.

The COEMIG program focuses on improving the safety and quality of gynecologic patient care and lowering the overall costs associated with successful treatment. The program is designed to expand patient awareness of – and access to – minimally invasive gynecologic procedures performed by surgeons and facilities that have demonstrated excellence in these advanced techniques.

The programs recognize that the integrated efforts and resources of both the surgeon and hospital are what help provide lasting health benefits for minimally invasive gynecologic and robotic-assisted surgery patients. To earn the COEMIG designation, surgeons and hospitals must partner together and demonstrate a cross-organizational commitment to minimally invasive gynecologic surgical care. COERS shares similar requirements but is focused on multi-specialty robotic-assisted surgery.

To be certified as a Center of Excellence in Minimally Invasive Gynecology by SRC, both VBMC-Brownsville and Dr. Nieves had to meet a set of strict guidelines and requirements related to patient safety.

For healthcare facilities seeking the Center of Excellence designation, such requirements include the performing of at least 100 minimally invasive gynecologic surgery procedures – such as laparoscopic hysterectomies – at the facility within the last 12 months. Applying surgeons must have performed at least 125 minimally invasive gynecologic procedures in their lifetime, including 35 such procedures performed within the previous 12 months.

Dr. Nieves-Sosa started his practice in 1996 with four partners. “Two of them left the partnership and moved to El Paso, and the third one left to concentrate on his federally qualified health center practice about eight years ago.  We used to have a little office on Price Road. We moved from there to the Brownsville Medical Center Medical Office Building and then to our present location, which is in the Edelstein Professional Building.”

He pointed out that he and his wife, Dr. Magdalena Flores, have worked together ever since. “My wife and I practice general OB/GYN, which means that we see patients with all kinds of women’s health problems, as well pregnancy.”

He adds that in the Gynecology part of his practice, they decided to focus and dedicate their practice to minimally invasive gynecologic surgery, including robotic-assisted hysterectomies, oophorectomies, retropubic colposuspensions, and other minimally invasive pelvic reconstructive procedures; some of which are not available anywhere else in the Valley. He explained, “What that means is that we want to concentrate on not opening up people.” He said, “We want to focus on doing the most we can with the smallest invasion that we can.” Currently, they have a mix of patients, ranging from pediatric patients, pregnant women, and older women who have menstrual, urinary or pelvic problems.

Dr. Nieves-Sosa is known for adopting state-of-the-art technology, which has become an extension that complements his practice. He stated, “It’s making an improvement over existing technology, and I have adopted that before others in the Valley.”

How did he meet his wife? “I was a third-year resident, and she was a third-year medical student in a rotation with another one of my classmates.  My classmate used to need some time off, and I would “selflessly” volunteer to keep an eye on them. So that’s how I met Magdalena, my wonderful wife.” Dr. Nieves-Sosa and his wife have two children, Sebastian 18, and Paola Ximena, 13.

“The reason I ended up in the Valley is because of two persons; one of them is Dr. Dagoberto Martinez and the other is Karen Young, my current office manager, who used to work for him.”

Dr. Nieves-Sosa had an offer from a doctor in Edinburg, but it never panned out. However, an opportunity came from a colleague in Puerto Rico who had a job offer in the Valley, but he decided to stay and help his father. He instead offered the job to Dr. Nieves-Sosa.

“My colleague gave me the contact info with the job offer, and I called the next day to set up an appointment. The rest is history.” He said, “This time I didn’t have to be chasing my recruiter.” He also had an offer to work in Louisiana, a state often flooded to the rooftops. “I’m not even counting Katrina, so if I had ended up working over there, it would have been tough,” he said.

Dr. Nieves-Sosa likes working in the Valley because it feels just like home. “It’s a different accent, but it’s the same kind of people.” He identifies with the people of the Valley. As an example, he says that all the TV programs he used to watch in Puerto Rico were dubbed in Mexico. “It’s pretty much the same upbringing, same superstitions, and occasionally with a few different words, but in essence the same ideas.”  Dr. Nieves-Sosa loves his profession and enjoys practicing in a region where he identifies with the people.

He says his concerns about the medical field are about the government. “They make it so challenging and there are so many regulations and so many different requirements and then so many ways to cut your reimbursement. I worry about that.”

Regardless, Dr. Nieves-Sosa said better patient outcomes and doing what is best for each of his patients drives him to perform minimally invasive surgeries.

What inspired Dr. Nieves-Sosa to do what he does? “I finished electrical engineering a little bit too young. I didn’t reconcile myself to the idea of just doing a 9 to 5 job wearing a pocket protector.”

During the time Dr. Nieves-Sosa was in engineering school, he had a friend, Dr. Juan Luis Salgado. Salgado was doing pre-med OB/GYN studies and always seemed to be having so much fun with what he was doing. That caught Dr. Nieves-Sosa’s attention, “I wanted to do it.”

Armed with his engineering degree, he found out that he could borrow money and pay for a new career in medicine. This time his parents didn’t have to pay for everything. “Dr. Salgado is the person who inspired me,” he said.

Forty years later, Dr. Salgado is still helping Dr. Nieves-Sosa. He said, “I saw Dr. Salgado in Boston during a medical conference, and he is helping me to become a faculty member and a member of the Society of Laparoendoscopic Surgeons.”

He said the non-profit organization is dedicated to ensuring the highest standards for the practice of laparoscopy, endoscopy, and minimally invasive surgery.

Dr. Nieves-Sosa is a one of a kind physician, dedicated and knowledgeable in the latest technology; his passion is to serve patients by providing the best care at a lower price and obtaining the best outcome. It is for his dedication to patient care that Dr. José Raúl Nieves-Sosa was selected to be our March 2017 Mega Doctor. MDN