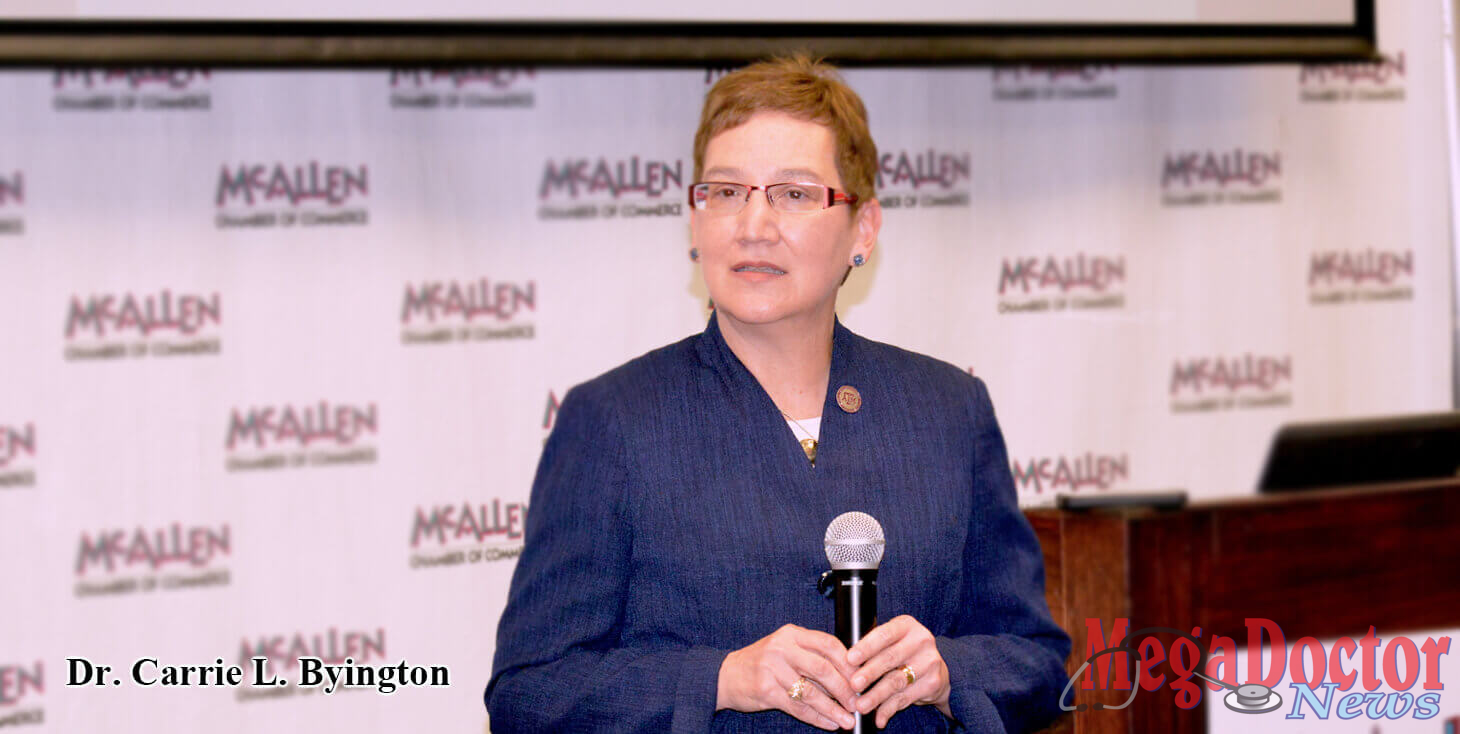 As Texas grows, the demand for services grows. The Rio Grande Valley is no exception, by the way, this is a region that is notably on the go. The area is not growing by itself, the tremendous growth is propelled by leadership in multiple areas like economic development, healthcare, banking, and international relationships.

On September 2016, following an extensive national search, The Texas A&M University System Board of Regents approved the appointment of Carrie L. Byington, M.D., to lead health education related efforts as Vice Chancellor for Health Services, Dean of the College of Medicine and Senior Vice President for the Health Science Center at Texas A&M University.

Dr. Byington visited McAllen and met with leaders of the area leaving an important communication of her activities in the state. In her current administrative roles, she directs the academic and development activities for nearly 2,000 faculty members. She serves on the University of Utah Health System Executive Committee, which has responsibility for the budget and strategic initiatives of the University of Utah Health System.

Aside from that, Dr. Byington is a federally funded investigator, with continuous support as principal or co-investigator totaling about $80 million since 1998. Because of her contribution to society and dedication to healthcare, she is our June 2018 Mega Doctor.

I feel privileged to have met Dr. Byington during her recent visit to the Valley. In this issue read more about her and Texas A&M and what they represent to one of the largest states in the nation.

Congratulations to Dr. E. Linda Villarreal, an Edinburg internist in practice for 29 years. She was re-elected to serve as an AMA delegate. Also, Dr. Laura Faye Gephart, a McAllen obstetrician-gynecologist. Both, physicians from the Rio Grande Valley, were elected to represent Texas doctors in the American Medical Association (AMA) House of Delegates.

If that is not enough, DHR’s Chief Medical Officer, Dr. Robert D. Martinez, was also appointed to the Texas Medical Board on June 14, 2018. The announcement was made by Governor Greg Abbott; Dr. Martinez is to serve on the board through April 13, 2019.

Good news about medicine are always welcomed. Dr. Wondwossen G. Tekle is a dual board-certified neurologist who specializes in Stroke and Neurocritical Care and Endovascular Surgical Neuroradiology. During our recent conversation with him, he explained that now, they have an expanded window for treatment of acute ischemic stroke.

According to Dr. Tekle, a stroke patient, previously had only six hours to receive treatment, now that window has been expanded to 24 hours. He pointed out that this can be done only in a select group of patients who qualify for this treatment and they take advantage of the expanded window based on specific imaging criteria. There is more inside.

Medical Alert! Measles are coming back and are causing outbreaks in Texas and beyond. Measles is a looming threat, especially for children who are not vaccinated.

If you remember, Measles were declared eliminated in the United States in 2000 thanks to vaccines, but now it has returned to Texas and other areas. According to the Texas Medical Association, physicians say the shot to prevent measles is the best defense against it. Unfortunately, declining vaccination rates have allowed the disease to return.

Be prepared and learn more in this special report.