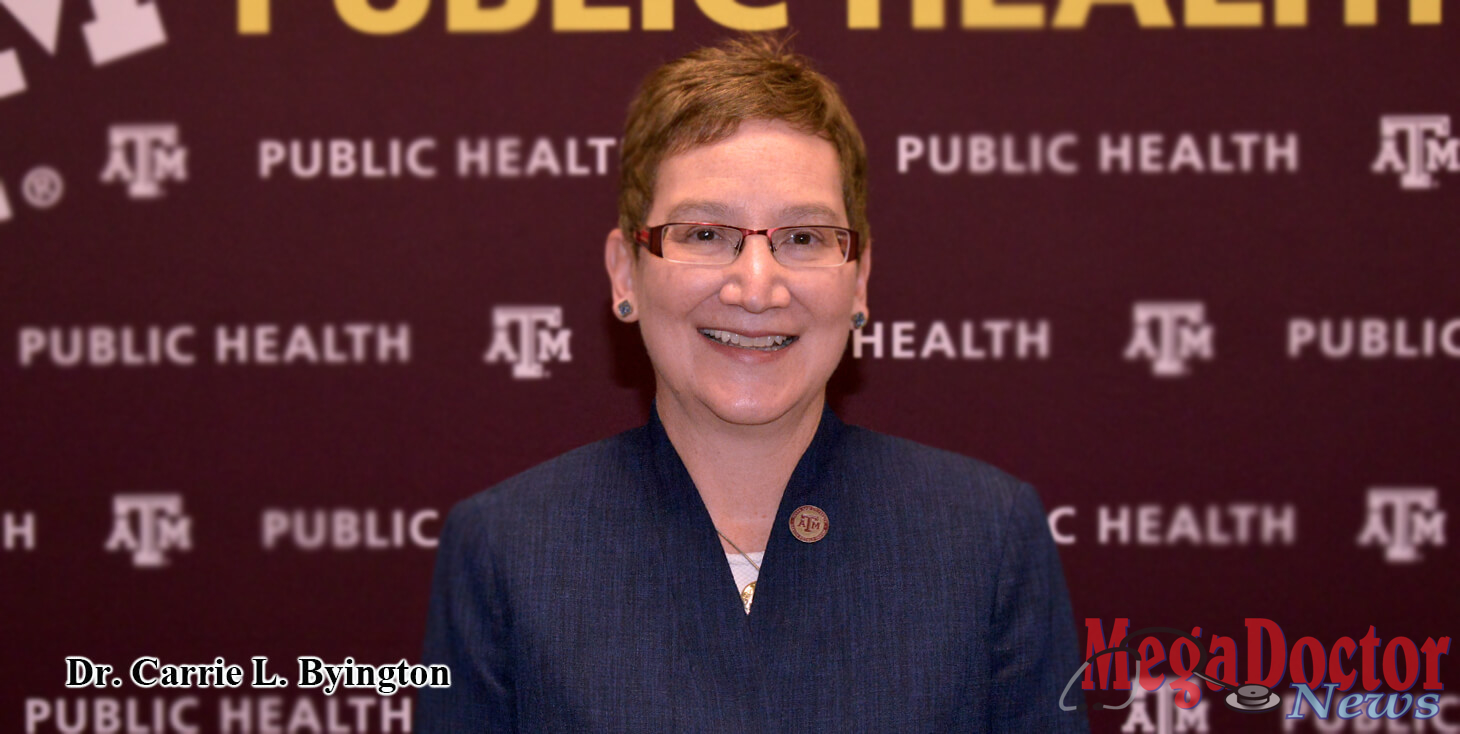 Dr. Byington came to speak about essential health matters and the work being done throughout the state of Texas. Here is a little peek of who she is and does at Texas A&M.

First of all, and according to Dr. Byington, their focus is on three priority areas, which include; improving rural population, providing care to active duty military and veterans, and collaborating with engineering to develop and implement new innovations to support health care in the 21st century. The impact of Texas A&M and her work is well known and respected.

“It is just my privilege and honor to be here today, I feel like I’m coming home,” she told an audience attending the event at the McAllen Chamber of Commerce. She was born and raised in a small Texas community north of the Rio Grande Valley. “I grew up in Falfurrias. I know that you all don’t consider Falfurrias the Valley, but I still consider myself a South Texas girl, and we share culture, history, and pride in this region.”

“I grew up in Texas, and I trained at Baylor College of Medicine in Houston,” she said.  Dr. Byington became a pediatrician at Texas Children’s Hospital and an infectious disease physician at the University of California San Francisco. Her first faculty appointment was at the University of Utah where she remained for 21 years.

Dr. Byington said it was an excellent opportunity to come back to Texas A&M to focus on this region that is exciting to her. “I am an Aggie class of 85.” She continued, “I am absolutely committed to the transformation of healthcare in the United States and to eliminating healthcare disparities. This region has a large number of healthcare disparities, and I am committed personally and professionally to working with all of you.”

She explained that people sometimes don’t realize how extensive Health Science Center is for Texas. She said, “We expand from Dallas all the way to McAllen. We cover a large portion of the geography of Texas, and we have a great deal of expertise.”

Dr. Byington took this opportunity to play a video that showed the Texas A&M team taking part in the work being done in Texas. “They are faculty, staff, and students; we’re exceptionally proud of them.”

The message through this video was inspirational and a provocative call to action. Part of the text asked these important questions; “What if creating a healthier world wasn’t just a nice thought, and we put it at the top of our to-do list. What if we brought world-class care to downtown and small town? What if we delivered the next generation of innovators, advocates, caregivers, and lifesavers?

The video continued and ended with these powerful words: What if stands firmly against why and goes hand in hand with why not? So why not us? We don’t look back; our drive is unstoppable. We ask what if and then we make it possible.

The work being done in Texas by this prestigious institution is paramount, and it does not stop here today. Dr. Byington would like to do as senior vice president for health sciences and vice chancellor is to mobilize the Aggie network of healthcare providers. She would also like to train and educate individuals in every county, whether they be patients, students, or health care professionals; in a few words, she wants to bring training and expertise. She said, “We were founded as a land grant school, so our focus is on rural populations.

On December 2, 2017, Texas A&M celebrated a very special commemorative. She said, “We just celebrated our 40th anniversary, the college is re-committing to its charter in delivering on its promise of excellence in medicine and by adding innovation through technology.”

Established in 1977, the Texas A&M College of Medicine was a result of the Teague-Cranston Act. This was a federal bill, which created a total of five U.S. medical schools, and along with the existing Veterans Affairs hospitals with the purpose of serving the needs of the country’s underserved areas.

Dr. Byington also said, “You may know that Texas A&M has one of the best engineering schools in the entire country, second only to MIT.” She continued, “We have nine hundred thousand dollars a year of research in engineering, and I believe caring for rural and military populations is going to take that technology.”

Texas A&M is a flagship for Texas, their devotion to their mission is unapparelled. They breathe, sleep and awake only to dedicate themselves to transforming the lives of the next generation of physicians. Their primary focus as emphasized by Dr. Byington is military health, rural population health and technology-supported innovation for health and health care delivery.

She added, “When I look at South Texas I see a direct alignment with our care from rural populations, and we’re excited to be here with our Healthy South Texas initiative.”

Dr. Byington brought to the audience attention that in two years, their work has had 782,000 encounters with people in South Texas in 27 different counties. “We are saving millions of dollars in health care costs for diabetes, for asthma, for Zika virus. At that point, she instructed Olga Gabriel Director Texas A&M Health Science Center McAllen Campus to share those results with the audience.

As an infectious disease physician, Dr. Byington was the Zika doctor for the U.S. Olympic and Paralympic teams in Brazil.  “I am very interested in the Zika virus and excited to use the Healthy South Texas platform to try to educate pregnant women in the Valley to help prevent them from becoming infected with Zika virus.”

She also said, since the Healthy South Texas platform is in place here, they are in search for partnerships to expand their health science professional training nursing public health. “I would love to bring down pharmacists, physicians, and dentists.” She said, “The Texas A&M dental school is the most diverse in the United States, and the Texas A&M pharmacy school trains the most Hispanic pharmacists in the United States, we need to be here, hoping you open your doors to us.”

Dr. Byington is a national leader in pediatrics and infectious disease, her career accomplishments include awards from the Robert Wood Johnson Foundation, the Centers for Disease Control and Prevention, and the National Institutes of Health, the American Academy of Pediatrics. Notably, she is an elected member of the National Academy of Medicine and National Academy of Inventors.

Even with all the success she has achieved, she does not forget where she came from. “The Aggie core values that we have are the same values that I learned in my home growing up in South Texas.” She continued, “The strongest thing that South Texas has is strong families, strong values, and commitment to the community. We want to be part of that. So, thank you for this invitation,” she finalized.

Dr. Byington holds board certification and national recognition in both General Pediatrics and Pediatric Infectious Diseases. Dr. Byington proudly received her Bachelor of Science in biology from Texas A&M University and Doctor of Medicine from Baylor College of Medicine, both with honors. She trained in pediatrics at Texas Children’s Hospital and in pediatric infectious diseases at the University of California, San Francisco.

This is a QR, scan it, and it will take you to the video called What if?