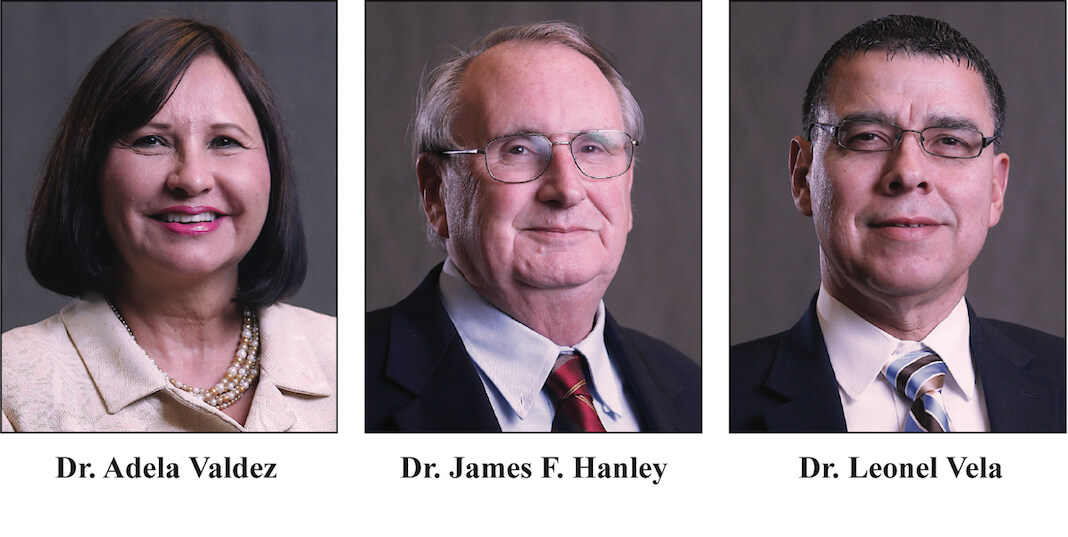 Dr. James F. Hanley, a clinical professor with the UTRGV School of Medicine and director of the UTRGV Internal Medicine Residency Program at Valley Baptist Medical Center, has been selected by the academy to serve as a member of the Shine Academy. In addition, Dr. Adela Valdez, associate dean for Student Affairs, and Dr. Leonel Vela, senior associate dean for Education and Academic Affairs, also were selected as inaugural members of the academy for the UTRGV School of Medicine.

The UT System Academy of Health Science Education was founded in 2005 and renamed in 2013 in honor of Dr. Kenneth I. Shine upon his retirement as the system’s executive vice chancellor of Health Affairs. The academy’s mission is to support and promote “excellence in all aspects of health science education, educational scholarship and leadership,” according to the academy’s bylaws.

Dr. James F. Hanley attended medical school at the University of Connecticut School of Medicine in Farmington, Connecticut, and completed his internal medicine residency training at Madigan Army Medical Center in Tacoma, Washington. He is board certified in internal medicine, diplomate of the National Board of Medical Examiners, and has an added qualification in geriatric medicine.

He has been a recipient of two American College of Physicians Laureate awards from the Army and North Dakota ACP chapters, and received the 2010 President’s Choice Award in 2010 from the UT Health Science Center at San Antonio.

Dr. Adela Valdez earned her medical degree from Baylor College of Medicine, and completed an internship from UT Health Houston and her residency training at UT Health San Antonio, both in family medicine. She also completed a fellowship in healthcare policy through the National Hispanic Medical Association and New York University, and earned her Master of Business Administration from the Ken Blanchard College of Business at Grand Canyon University.

Valdez is the recipient of several awards, including the Friend of the Public Health Award from the Texas Department of Health, South Texas Hospital for the successful implementation of public health initiatives in chronic disease, HIV, and indigent care to the four county region of South Texas, the Excellent Leadership and Service to the Task Force Award from the Texas Health Disparities Task Force, and the Distinguished Service for Women’s Equity in Medical Education from the American Medical Association, American Association of University Women. She has also been featured in the National Library of Medicine’s “Changing the Face of Medicine.”

Dr. Leonel Vela was founding dean of the Regional Academic Health Center (RAHC) in Harlingen, which was a campus of UT Health San Antonio and a precursor to the UTRGV School of Medicine. He earned his medical degree from Baylor College of Medicine and completed post-graduate studies at Harvard University, where he received a Master of Public Health degree. He is board-certified in Preventive Medicine and is a diplomate of the American Board of Preventive Medicine.

Vela has served on several state, national, and international committees addressing tuberculosis, diabetes, migrant health, border health and telemedicine. He has participated in several professional organizations and previously chaired the National Advisory Council on Migrant Health for the U.S. Secretary of Health. He also chaired the Group on Regional Medical Campuses for the Association of American Medical Colleges. Vela has received various awards and was honored by the U.S. Department of Health and Human Services Migrant Head Start Branch, as recipient of the Plate of Bounty Award.

All new members were honored and recognized on February 15-16 at the 2018 Innovation in Health Science Education Conference in Austin.