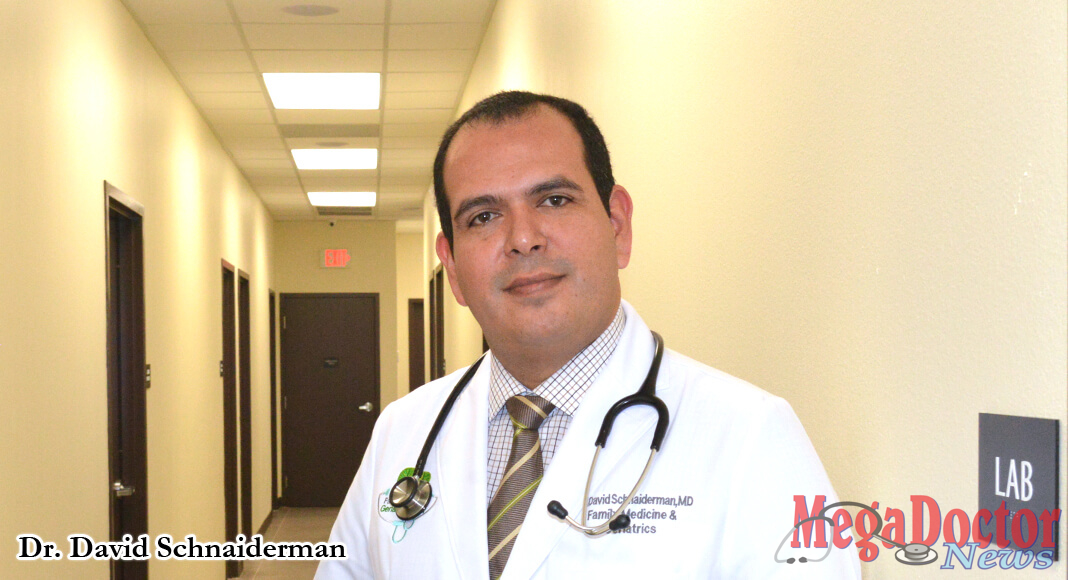 He is a Family and Geriatric Medicine Physician, with a black belt in Karate

Dr. David Schnaiderman is a physician who brings a lot of experience to the field of medicine in the Valley. He was first trained in Lima, Peru and practiced in the jungle under the most precarious conditions. This experience means a lot to him; he treated people in need, which according to Schnaiderman were the most grateful people for what he did for them.

He is Board-Certified in Family Medicine and a Geriatric specialist. During the six months he spent in the jungle, he learned that compassion is the right practice in medicine, it’s a feeling of loving and helping patients in great need.

The field of medicine is one that he knows well. Ever since he was a child, Dr. Schnaiderman was exposed to doctors, hospitals, and sophisticated equipment that his father used to import and sell in Peru. His father used to take him during the delivery of heart valves, pacemakers, and ventilators used in intensive care units and in the medical industry of Peru.

“I am the first doctor that I know of in my family,” Dr. Schnaiderman told Mega Doctor News.  “Yes, my father had a business in Peru where he imported state-of-the-art medical equipment from the United States to Peru.” He continues, “I used to go with him and watch pacemaker implant procedures. And that’s when I said I like this world.”

So, at a very early age, he got that sense of what he wanted to do. “So, for me, it was either being a doctor or being a chef.” Well, now you know the rest of the story; he is a doctor and is among the best. On March 8, 2007, he was named ‘Doctor of the Day’ for the Texas House of Representatives.

“The ‘Doctor of the Day’ recognition was a great honor for me. Being able to take care of our legislators and representatives was an important and memorable experience for me.”

With regards to cooking, he said, “My wife says I cook well, I still think that, in the kitchen, she cooks better than I do. However, medicine pulled me a little bit more.”

Dr. Schnaiderman was born and raised in Lima, Peru in South America. He did all his pre-med and medical school training in Lima and graduated in the year 2000 with a medical doctoral degree.

“I worked in my country for around five years in private practice. I decided to apply for the residency specialty in the United States.” He said that the decision was a good one, but not easy to make, what came after was the biggest challenge of his medical career.

Propelled by a desire for serving others and saving lives, he completed three years of family medicine studies at the University of Texas Medical Branch in Galveston.  He stayed for one more year for a subspecialty fellowship in geriatric medicine that specializes in patients 65 and older.

Dr. Schnaiderman said that it was not an easy process to become a doctor for the second time and doing it from another country. “Yes, it was a lot of study time, but at the same time refreshing,” he said.

It took him about a year and a half between the three different types of testing, traveling, and interviewing. Plus, that also required getting letters of recommendation, which, at a point, become essential to the complicated process.

He said that while still in Peru, he studied the basis of medicine to prepare for Steps 1 and 2. When the interviews started, he did six months of research at Oklahoma University, then one month in Detroit, Michigan at the Detroit Medical Center (DMC), and to top it off, one month in New York. “I went to three different cities to make research and observation trips and get the letters of recommendation needed from doctors that work in the United States,” he said.

He admits that the challenge is not easy, but in the end, it is very rewarding. “You have to have the part of you that wants to serve and not get burned out, and to be happy in your profession,” he stated.

Today, he can say, that he lived in Lima until the age of 29, then there were four years in Galveston with his wife, Elizabeth, and then in McAllen it has been nine years.

When he arrived in Galveston, he and his wife felt right, they had friends there from Peru.  “We felt very comfortable in the University of Texas Medical Branch, which he remembers as being an excellent experience.” That is why he stayed longer to get his geriatric specialization and to be able to care for the older population. “It’s not the same taking care of a 40 to 50-year-old patient, as it is to care for patient who is 65 or older,” he said.

Dr. Schnaiderman pointed out that his love to care for the older population, came about during the time he worked in the jungle. He was serving with the Peruvian Air Force as part of his social service to become a doctor.

“I think I am a good listener, so I enjoy it.” He continued, “I have a lot of respect for the older generation, so that’s why I applied for internal and family medicine because both were taking me to geriatrics. That was the goal.”

Before opening his private practice called Family Medicine and Geriatric Center in McAllen and Edinburg, he was a hospitalist doctor. Hospitalists are physicians whose primary professional focus is the general medical care of hospitalized patients.

He told Mega Doctor News that what he saw on a daily basis was severe complications that put a patient in the hospital from prevalent diseases like diabetes, high blood pressure, and cholesterol to name some, which end in severe complication.

“I think I’ve seen the whole spectrum compared to someone that doesn’t have the acuteness of a hospital exposure.  I also saw the need for more physicians that are the troops on the ground, the ones that can work to keep that patient out of the hospital,” he said

Dr. Schnaiderman also says that the most significant concern of his patients’ families is that doctors are too busy, and they say that they don’t have enough time for them. “I say first, because of the growing population, but also the medical system in our country that need improvement.”

That is why Dr. Schnaiderman wants to be the doctor that has the time, that listens to his patients and tries to prevent things from getting worse. “Another thing that I didn’t like was the part when a patient leaves the hospital, and then I didn’t see them for a follow-up. This intrigued me,” he said.  He continues, “Did I do the right thing? Is that patient feeling better? How can I do to follow up besides calling the primary?”, this was also a big reason to open his own practice.

Being a geriatrician also opens the door to possibly one of the most challenging times for a patient, when he or she is at the end of life. Dr. Schnaiderman has the training and lends his professional services at Amara Hospice.

“I think the only guaranteed thing, when we come into this world, is that we will exit at some point.” He said, “Is this exit going to be honorable?” He continued, “If you lived a good life, you have to go through it, good until the end. Sometimes that does not happen. That is something that I also see in the hospital and try to prevent in my clinic.”

You mentioned a little while ago that you are married to Elizabeth. Was is it love at first sight?

“Actually, it was not. I have known my wife since I was 21 and she was 17. We were the best of friends; we knew each other well,” he said. “I would call her, and she would call me for almost everything. We trusted each other that’s why we were best friends.”

At some point in 2005, they decided to start dating as a couple, even though it was “kind of tricky” because he knew he was leaving to come to the United States. “So, we thought we were doing something crazy, but we were so good together that we said, “You know life will find a way and let us know”, and we went for it. Ten years later we are still strong and together and with three beautiful kids, so we made the right decision,” he stated.

So now they have Sarah, who is 8 and Berko; he is 5. “We named him in honor of my grandfather from Romania,” he said. The youngest is Leah, she is 3. During his free time, he enjoys being with his family, and has very little time to practice his hobby; he is a black belt in Karate and enjoys martial arts.

Dr. Schnaiderman was selected as the Mega Doctor this month for the great compassion and care he offers his patients. The people he serves in the Rio Grande Valley are fortunate indeed.