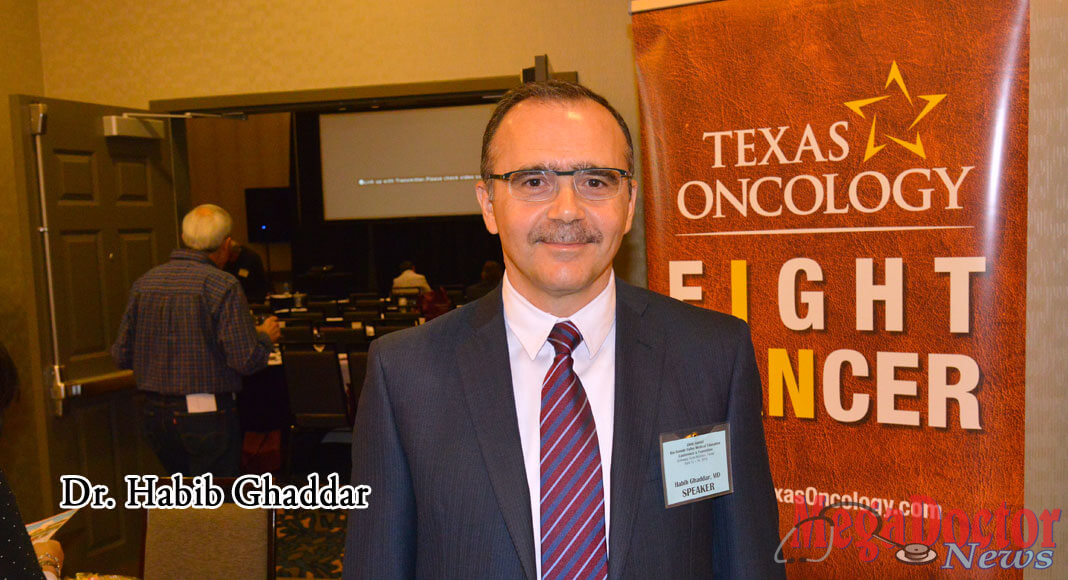 Dr. Habib Ghaddar is a medical oncologist since 1995, that year he moved to the Valley from MD Anderson in Houston. He was also a member of the faculty for an extraordinary event of continuing education for the medical community titled, The 26th Annual Rio Grande Valley Medical Education Conference & Expo.

Cancer prevention was his general topic, specifically what we as individuals can do to modify and reduce the impact of certain risk factors against the development of cancer. The main points he brought to the educational conference were a few risk factors that can be managed to help you reduce your risk of cancer.

He said, “This includes smoking, controlling your weight, adopting the right diet, and staying physically active, without forgetting to limit alcohol.” He continued, “If you’re able to control those five elements which are partly under your control you can reduce your cancer risk by around 68%, which I thought was phenomenal.”

Some of the other factor he covered during his presentation was sun exposure early in life. “The deadliest of skin cancers is called melanoma; it tends to increase that risk through blistering sunburn or intense exposure very early in life.” He said, “A one-time exposure to a blistering sunburn can double your risk of melanoma, as opposed to the less invasive skin cancers, the so called basal cell carcinoma and squamous cell carcinoma, which are sometimes called nonmelanoma skin cancer.”

Dr. Ghaddar went to an extreme to recommend that we protect the youth against those intense exposures to the sun, which is an important element to avoid falling intothis dangerous situation.

What about cell phones? “We really don’t have a very strong evidence yet concerning the cell phones and the power lines. Alcohol, onthe other hand,we definitely have a very strong evidence that it causes cancer and increases the risk of cancer. He said, “As a matter of fact around 5% of total cancers can be purely attributable to alcohol. And the sad part to me here is that the use of alcohol is on the rise in this country, so the future doesn’t look too good as far as alcohol and the risk of cancer.” Standing at the podium, as he was addressing hundreds of physicians Dr. Ghaddar said, “Gentlemen limit it to two and ladies to one.”

He pointed out that every single study that looked at what is the threshold that really triggers cancerous transformation is the consumption of alcohol. “One drink for a woman or two drinks for a man per day considerably increases your risk of cancer.” In such little amounts? “Absolutely, and especially I have to say the beer in this area, somehow people don’t consider it alcohol.”

What kind of cancers have you seen in the area and which ones are more dangerous? Dr. Ghaddar said, “Other cancers that we tend to see more are probably liver cancers, mainly because there is a higher prevalence of hepatitis in this area, and of course, liver damage from alcohol consumption.”

“We tend to see the general trends for the whole nation, so common cancers will happen commonly here as well, like breast cancer and cervical cancer in women.” He continued, “I’ll point out something about cervical cancer because this is a preventable disease both through vaccination and early detection, through Pap Smear. I really urge women to focus on that particular health maintenance protocol.”

He also encourages all parents to make sure that their children, meaning boys and girls, are vaccinated with the HPV vaccination to reduce the risk of general cancers and cervical cancers.