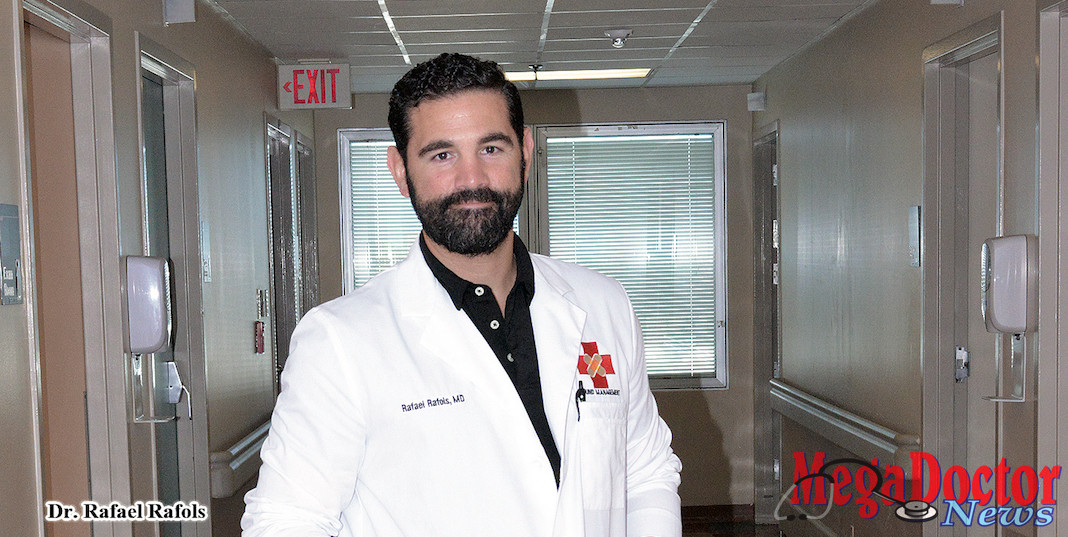 Anyone in the medical field in South Texas already knows that Prevention of the disease of Diabetes is a monumental task. It is not being ignored, however, efforts should be redoubled, and strengthened, as in a strategically planned and orchestrated partnership among the medical and business community.

That is why, this month, Mega Doctor News once again visited with Dr. Rafael Rafols, a different physician doing fantastic work in his field of diabetic wound care.

According to Dr. Rafols, this entails caring for a wound until it heals. “Mostly after two weeks, any wound that has not followed the normal physiological healing process can be considered a non-healing wound that requires a different approach to patient care.” He said, “Many times one of the tools that we use to address those problems is hyperbaric medicine and advanced wound care.”

He told Mega Doctor News that the prevalence of adult diabetes is more than 20 percent higher in South Texas than in the rest of the entire state of Texas – close to 70,000 people have adult diabetes.

That is why, as a wound care certified specialist he uses the hyperbaric chamber, which is a pressurized cylindrical chamber where a patient receives therapy with pure oxygen.

He explained that this type of treatment treats patients with decompression sickness, bubbles of air in the blood vessels or certain wounds that aren’t healing.

Dr. Rafols told Mega Doctor News that this treatment is not widely used or in his words “under-utilized.” However, he emphasized, it does require extensive training as far as managing the hyperbaric chamber because there could be potential lethal complications.

The hyperbaric oxygen therapy chamber has an air pressure that is three times higher than normal, providing a patient the ability to inhale more oxygen than under normal conditions. With more oxygen in the blood, more growth factors and stem cells are released to make healing faster and help fight infection.

“So you do have to know what you’re doing.” He stated, “It requires a well-trained staff, and currently I’m one of a few, probably the only one fully certified through the national board of diving and hyperbaric medicine as a hyperbaric technician.”

How valuable are your services for this type of patients? “Sometimes patients are sent for limb salvage, and multiple surgeries and depressurization attempts have been made.”

He also said that many times it could be something like a second-degree burn that is being sent over for management. “So it can range from even a simple skin rash that is being a little stubborn to a patient that is close to losing a major limb, some of them are quite severe already, when they get to me.”

For this situation, South Texas has been labeled ground zero for Diabetes, because more than one-quarter of all people with diabetes in South Texas, have uncontrolled diabetes.

Even though, Dr. Rafols keeps a very tight schedule taking care of his patients, he firmly believes that prevention education deserves a delivery in a manner that matches the monumental challenge that Diabetes presents.

What would you recommend to our readers to avoid ending up in this situation? “Prevention means a lot of things, one of them is following advice from your primary care physician if you have Diabetes, high blood pressure, or are a smoker. Then you are at two to three-fold risk for the increase in complications and for developing chronic wounds.” He continued, “If you look at the labels on most of the cigarette packages it does say there that it could lead to a heart attack or loss of a limb and amputation.”

Dr. Rafols pointed out that many times, his patients that do come in are from 70-80 years of age. He stated, “If they could have made healthier food choices, maintained a healthier weight, and engaged in physical activity every day; if they had made different choices when they were in their 40’s, they probably wouldn’t be here.”

The truth of the matter is that Dr. Rafols concerns for the South Texas population are justified. As he said, “Unfortunately, making a change in their lifestyle was not the case in the past for many patients.” He adds, “Over the previous five years it’s been getting worse. “I’ve noticed that my patients have been younger and are sicker. I treat patients that are in their late 30’s and undergoing amputation. Unfortunately, when somebody suffers a lower extremity amputation they do have a 30-40% increase in mortality over five years.”

He explained that for patients on dialysis and over 70 years of age, they have a 25% chance of dying within the first month of the amputation and that subsequently increases every year after that. “It is a difficult problem to try to control, and that is why I say that prevention, definitely is under-utilized and more resources should be diverted to prevention.”

What would you recommend to patients already suffering with severe wounds? “There are psychological components and a stigma associated with chronic wounds. It is important to try to project optimism to the patient; it is vital.” He continued, “Some patients with chronic wounds have mostly given up, and a lot of times when they are sent over to me they are frustrated. They have been seen previously by other wound care doctors or other specialists.”

Dr. Rafols says that what sets him apart is the fact that he looks at the patient as a whole and takes a holistic approach. “I examine and evaluate the patient’s lifestyle. I look at their surrounding environment, including involving their family members. Faith is important, and I do embrace that, and I do encourage the patients not only to have faith, but to be objective and to follow the recommendations from their physician.”

“Compliance sometimes is difficult, and a lot of the wounds that we do treat are again very stubborn, recalcitrant wounds that have not healed despite aggressive intervention sometimes by other physicians. Consequently, patients from other wound care doctors in the area eventually end up under my care.” He continued, “It is critical to adhere to doctor’s recommendations, in this case of your primary wound care physician and to follow a treatment plan formula.”

Dr. Rafols stated that he formulates a custom solution and plan based on the individual patient that it is important to follow through. He said, “Of course not all treatments are successful in the first instant, but you need to follow a structured process, A-B-C, and strict adherence is necessary to receive or to obtain the best outcome.”

Dr. Rafols has a private practice and operates under the name Wound Management in Edinburg, Texas. He said, “Most of our wound care is done at Doctor’s Hospital at Renaissance Wound Care Center where we provide hyperbaric therapy.”

He added that through his practice he provides inpatient care in most acute care hospitals, nursing homes, and rehabilitation centers. “We’re available seven days a week, 24 hours a day Valley-wide.”

It is important to note that Dr. Rafols was one of the first physicians to start using stem cell skin substitutes and the first doctor to use Thera-Skin, which is an organ tissue donation through a program for patients that have donated their body to science.

“We’re harvesting skin and using it to heal wounds.” He stated, “So I was the first physician to bring that product here about three months ago, and we are having great success.”

Dr. Rafols is also very committed to bringing increased awareness to prevention and the problem of chronic wounds and amputations in the Valley.

Do you think that there has to be a stronger effort to bring awareness of Diabetes prevalence in the region? “Yes,” he said categorically.  “Diabetic foot care is paramount, control of the physical activity, body weight, and screening. I’m trying to get some events organized by the latter part of the year or possibly 2017.  After the first of the year is when people become more concerned about their health.”

He says that more health campaigns are needed to screen for diabetic ulcers or to screen for atherosclerosis, which is lower extremity circulation problem, which can lead to amputation and combined with diabetes can accelerate the problem.

“So it’s a double-edged sword diabetes, which in turn accelerates peripheral arterial disease, which combined leads to amputation and then once the patient is in amputation, death can be around the corner,” he stated.

He also said that most of his patients do have complicated serious problems. However, he takes satisfaction in the sense that he can improve their life and help them cope and adjust by meeting their particular needs.

“Sometimes even though the relationship with the patient might be brief; sometimes we can bring comfort to the family. Having said that, it is bittersweet; there are also all the wounds we have helped to heal and all the limbs that we have been able to save.”

How do you want to be remembered? “Innovation, focusing on the care of the patient, by providing what the patient needs and not for self-benefit. Bringing awareness to the community about the need for proper wound care and channeling the patient through the appropriate guidelines and exposing the severity of this epidemic regarding diabetic ulcers and amputations.” He continued, “We’ve saved thousands of lives because of diabetic ulcers that we’ve healed. Every time we do that, we save a life.”

Dr. Rafols says he has been providing wound care services for the last five years, “I am 100% dedicated to the field of wound care.”

Dr. Rafael J. Rafols has been named our Mega Doctor of this month for his renewed efforts in bringing awareness to the diabetes epidemic that is devastating families in South Texas.

Written by Roberto Hugo Gonzalez, the 2009 SBA Journalist of the Year award winner and the 2009 and 2012 Paul Harris Fellow award recipient.  MDN