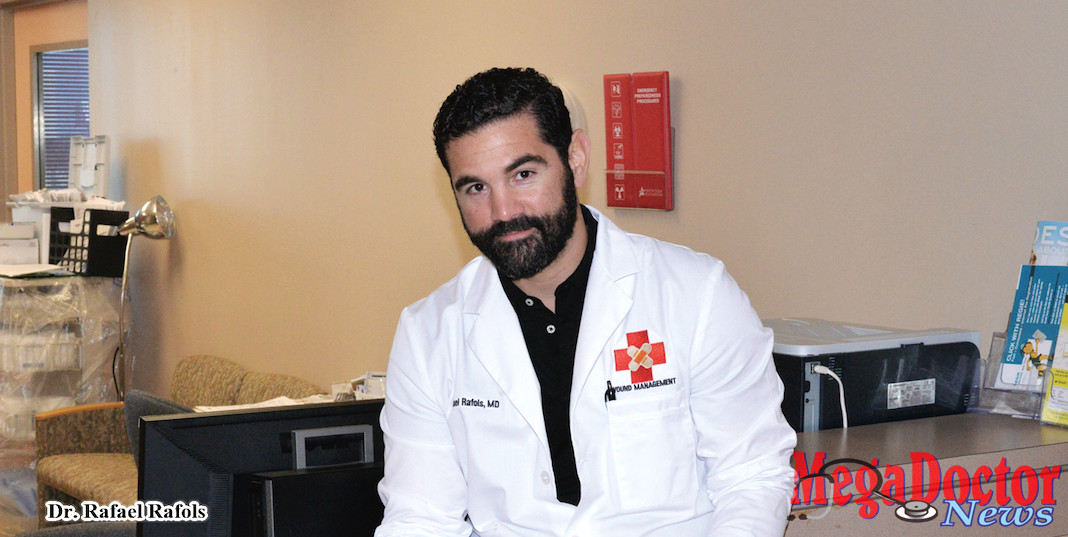 Stuck in the middle of the Diabetes Challenge in South Texas, many medical doctors are battling this war with everything they have. One of them is Dr. Rafael Rafols, a family medicine practitioner with a certification by the National Board of Diving and Hyperbaric Medicine.

During his five years at the forefront of this battle, he has been able to save thousands of limbs through a sequence of therapy steps, which he calls a formula.

Dr. Rafols is a dedicated physician in his field and during the last five years, it’s been 100% of his time has been spent with patients that need him.

He told Mega Doctor News that he provides what the patient needs and it is not for self-benefit. You will find this article interesting, especially with his renewed effort to bring more awareness to this devastating disease.

On another matter, October is National Breast Cancer Awareness Month. It is important for you to know that one in eight women born today may get breast cancer at some point during her lifetime.  Did you know that breast cancer is the second most common type of cancer in women?  It’s true, on both accounts – but the good news is that today many women are surviving breast cancer, thanks in part to annual mammograms and early detection.  More inside this issue.

Great news, the Department of Physician Assistant Studies in the College of Health Affairs has received approval from the Accreditation Review Commission on Education for the Physician Assistant (ARC-PA), to enlarge the number of students over the next three years.

The University of Texas Rio Grande Valley is continuing its efforts to prepare graduates in healthcare professions by expanding the number of students admitted to the Master of Physician Assistant Studies (MPAS) program.

Doctors Hospital at Renaissance is taking the leadership by bringing 7 Germ-Zapping Robots™ to Destroy Hard-to-Kill Bugs Places. The idea is great because it enhances patient safety by deploying robots to destroy germs and bacteria that can cause infections. We have an article dedicated to these Germ-Zapping Robots™.

Mega Doctor News has had the pleasure and honor to interview more than half of the medical students in training in the different residency programs offered by The UTRGV medical school. This is a unique opportunity because, since its inception, we have been there.

This time around, I met with Dr. Zishan Hirani, a resident who is in his second year of obstetrics and gynecology. He told Mega Doctor News that he has gained valuable experience as he continues his training at the University of Texas Rio Grande Valley Medical School.

He is from Plano, Texas, and enjoys the Valley, and like he says, “It is a unique place where he is building his career and getting the most advanced medical training in obstetrics and gynecology.”

As the publisher of Mega Doctor News, I frequently interact with professionals in the medical field, also with other professionals in charge of telling the story about new students coming to the Medical School.

One thing I can say to you is that five years ago, the medical school was only a dream and considered a long shot that it would even happen. Now, we have it, and the school in partnership with Doctors Hospital at Renaissance are not wasting any time.  They are training the future medical specialists that are badly needed.

One day, as I was talking to Marci Caltabiano, the UTRGV Director of News and Internal Communications I kidded with her, “What am I going to do with so many doctors in preparation for the area?”

I made that comment on the day that the university celebrated the white coat ceremony for the first 55 students starting their career.

Even though 55 might sound like very many, the shortage of physicians is grave, and we need much more. Remember that South Texas is an underserved area. But one thing I can say is, this is a good start. Let me rephrase it, it’s a Great start.

I know that you will enjoy this issue! MDN

Dr. Zishan Hirani, in His Second Year of Obstetrics and Gynecology Residency