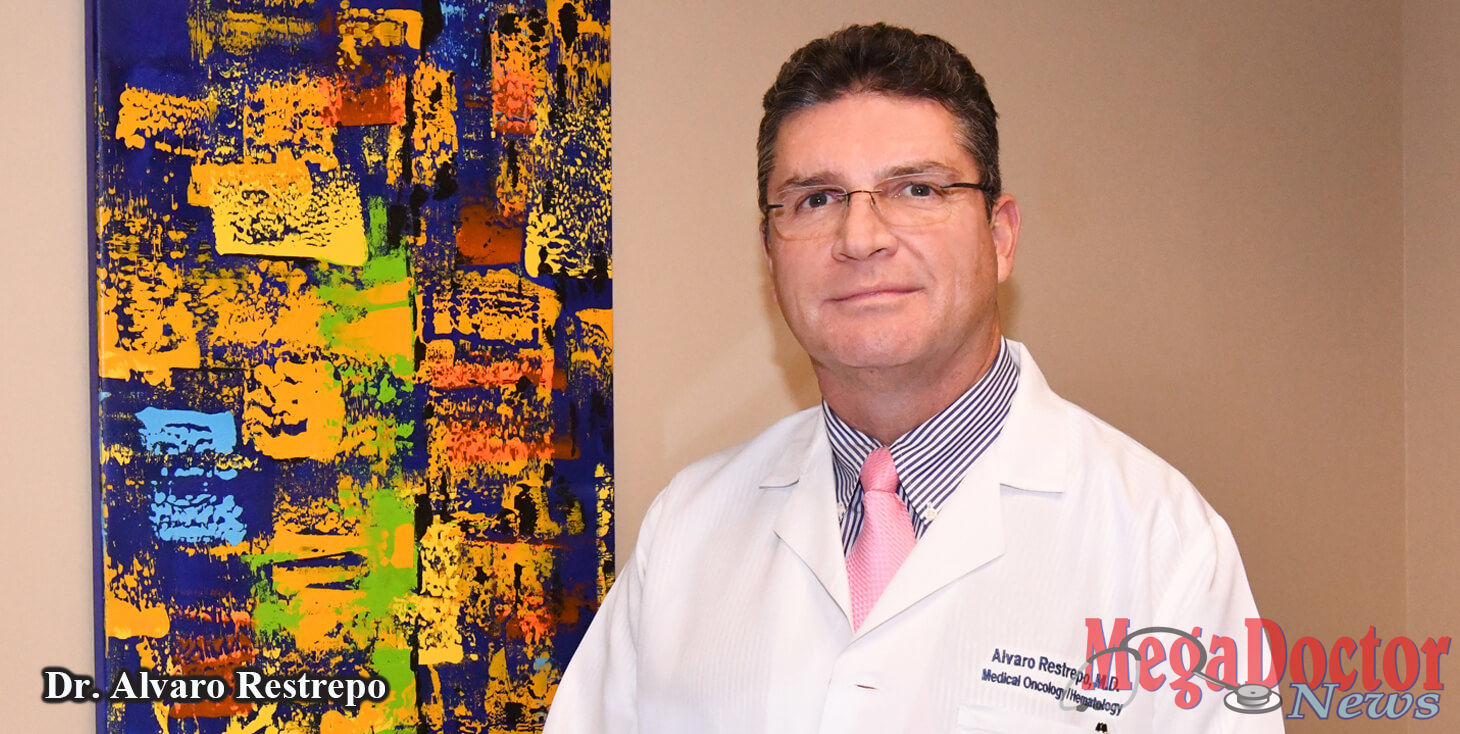 For more than two decades, Dr. Alvaro Restrepo, an oncologist, hematologist, and research Director for Texas Oncology RGV, has kept up a fierce fight against cancer. In the last eleven of those twenty years, Dr. Restrepo has worked with Texas Oncology RGV to organize an annual event to bring awareness to the fight against breast cancer. The annual awareness event includes walk, run, and bike-ride activities every year without fail.

This year’s 11th Annual Breast Cancer Awareness event, which takes place on October 6, 2018, will bring together hundreds of participants from throughout the community. This will include cyclists, runners, and walkers of all ages unified with the same goal in mind of defeating cancer.

Mega Doctor News had a good conversation with Dr. Restrepo, he is such a dedicated oncologist/ hematologist. He said that breast cancer statistics have remained the same in the Valley, at least, over the last couple of years. However, what had been decreasing was the mortality rate due to better awareness and better treatments. The incidence rate of breast cancer in the Valley is less than the average in the rest of the state and the nation, according to the Texas Department of State Health Services.

He added, “But what we see is a more advanced diagnosis at the time the tumor is found.” Dr. Restrepo emphasizes that thanks to better treatment, survival had been improving over the last twenty years.

Having the opportunity to talk to Dr. Restrepo, an oncologist considered a respected authority in his field, it was important to ask, how early in life should someone get checked?

He said, “It depends. For somebody without a family history, the recommendation is to start at least at age 40.” He continued, “The recommendation, at least, is to have a first clinical evaluation and sometimes a baseline mammogram. And depending on the risk factors of that patient, that can be once a year or every two years, or with some patients, to wait until age 50 to be checked on a regular yearly basis with mammograms.” He pointed out that the recommendation is for patients after age 21 to visit their physician at least once a year.

Concerning self-breast examinations, he says that it is controversial sometimes. He adds that some medical societies recommend against it, while some others recommend in favor. He said, “The American Society for Oncology recommends in favor of doing breast self-examinations.  It’s a very simple way for patients to better understand their bodies, and if there’s any abnormality.”

He noted that many of the tumors are diagnosed by the patient. He said, “So if they can check themselves, they can know when something is going wrong.”

Is there any difference in age to get checked for breast cancer for men or women? He said, “The question is, is it a patient with a family history, or a mutation that is a hereditary like BRCA1 or BRCA2 or other post-mutation for breast cancer. It’s usually recommended to be checked ten years before the index case.” He continued, “In other words, if the mother was diagnosed at age 40, 43, or 45 with breast cancer and they have a mutation, it’s recommended for their daughter or siblings to be checked at an earlier age, at least ten years before.”

He also said that breast cancer in men is so rare that there’s not a guideline available on when to be checked. “But if the men belong in a family where there’s breast mutation it’s also recommended that they are checked ten years earlier than the index case.”

He said that in their clinic, they see at least two or three cases per year of men with breast cancer. He explained that the ratio compared to women is like one in a hundred is an approximation response to breast cancer in men.

Dr. Restrepo reminds everyone that in breast cancer the earlier the diagnosis, the better the prognosis. As an oncologist, he is also recognized as one who highlights cancer prevention. Or like he simply says, “One of the important things in prevention is to try to avoid the risk factor.” One of the most common problems is the use of hormone replacement therapy, which is a known risk factor for breast cancer and should be avoided.

“Another risk factor is alcohol.” He said, “It is important to consume zero amount of alcohol or reduce it only to a minimum.” He said it loud and clear, “avoid alcohol, no tobacco, and obesity and sedentary life, are risk factors.”

Dr. Restrepo said that for patients who have like a non-predisposition mutation or the BRCA1 or BRCA2 genes, then there are several medications that can be used for prevention. The use of the medication Tamoxifen decreases the risk of breast cancer by 50%.

Texas Oncology RGV is known to work closely with the community throughout conferences or resources available to the community for breast cancer prevention. Dr. Restrepo said, “We have an education and information meeting once a month called “Pink Positive”. Patients and survivors take part in these meetings.” On Texas Oncology’s website, they have other resources for the patient on prevention and early diagnosis, which is key for a better prognosis.

Dr. Restrepo spoke about the newest treatment being medicine.  “I think it is in better development of medications as they are more specific for the treatment of specific tumors.” He said, “One of the newest technologies, like liquid biopsies can detect the very cells that are circulating in the blood and help detect a tumor, and if it’s progressing or not.”

He said that in the past, they used medication that treated any cancer, but were not very specific so the outcome was not very good. “Today,” he said, “we have better medications that are more specific for a specific type of tumor.”

In simple words, it is important to know and remember that no two breast cancer patients—or their tumors—are alike. The good news in this field is that in the last twenty years the life expectancy has almost doubled. He says it is thanks to better treatment, especially for metastatic disease. “The chance of a cure has significantly increased especially because of an earlier diagnosis. Again, there’s a direct correlation between the earlier the diagnosis, the better the outcome,” he said.

On chemotherapy, Dr. Restrepo says that oncologists use Oncotype DX that can help determine if a patient will benefit or not from chemotherapy.

What can we do as a community to help those affected by breast cancer? “One of the most complicated problems in our community is the very high number of uninsured patients. And one of the problems with the technological advances in medicine is that the cost is increasing. So, it’s very complicated when you have a lot of things that can be done, but the resources are not there for patients to afford those treatments.”

“We see that in young patients, they have a higher incidence of being uninsured, and especially the patients that are older than 65 who have Medicare coverage. So, it’s a very complex problem, but there are things that we can do and that’s why we do this event of awareness and fundraising to help patients with socio-economic problems.”

Dr. Restrepo received a medical degree from Instituto de Ciencias de la Salud, in Medellin, Antioquia, in 1987. He completed an internship and residency in 1993 at the University of Miami Hospital and Clinics, in Miami, Florida. In 1997, Dr. Restrepo completed a fellowship in hematology/oncology at the same University of Miami Hospital and Clinics.