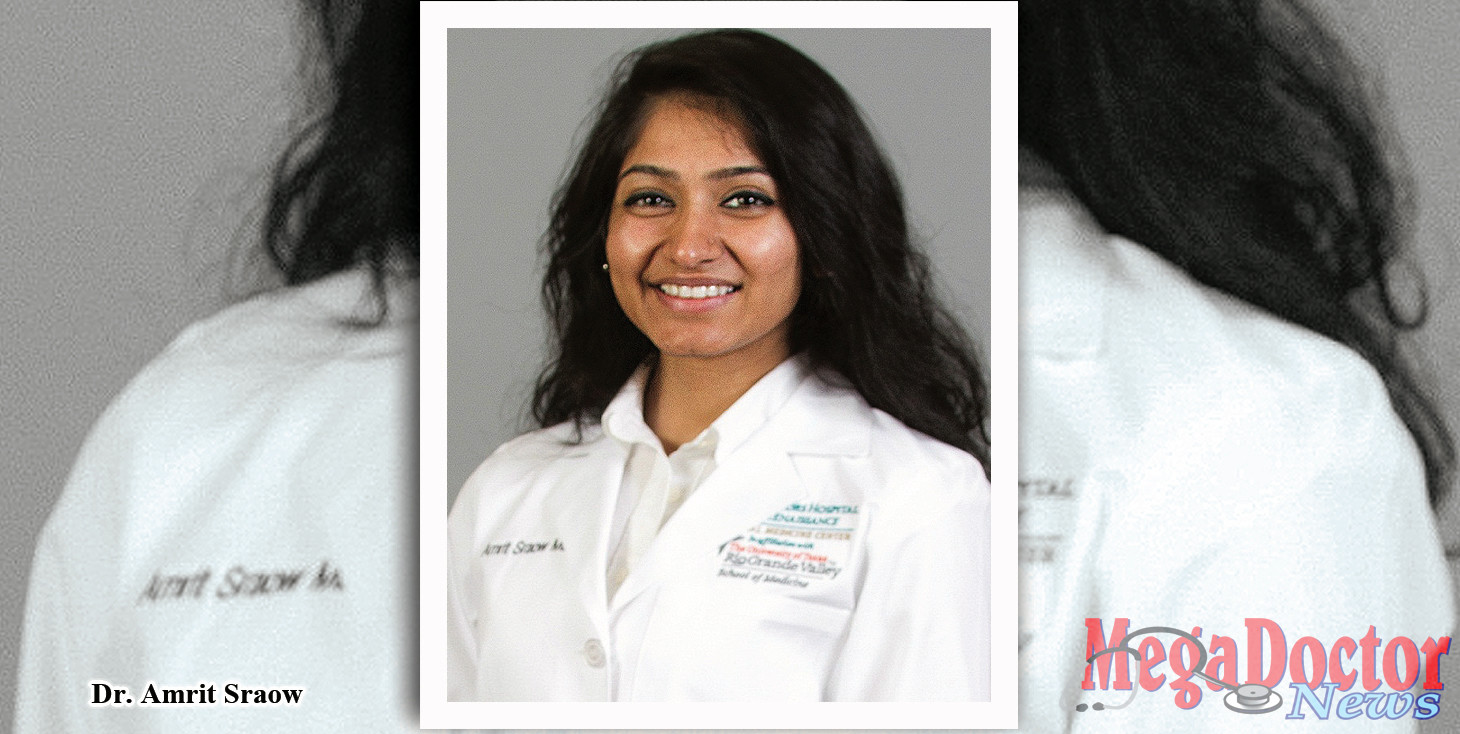 When Mega Doctor News spoke with her, she had been in the program for two weeks. She comes from Phoenix, Arizona and she said, “At first, I was a little hesitant about moving to the Valley, but as soon as I got here, everyone is so welcoming. It just feels like a big family, and interns of the program itself are great so is DHR and UTRGV.”

According to her, there is a lot of room and potential for growth and opportunity, which is one of the biggest things she came looking for. She said, “Out of med school, you want to find places where you can prosper, and the community can thrive as well. This program is the epitome of that.”

Dr. Sraow belongs to a family that has many physicians. “Yes, there are a lot of us in medicine,” she told Mega Doctor News.

“I’ve two cousin-brothers in the medical field.” She continued, “My uncle is in interventional cardiology, and I have a cousin in the emergency room, another cousin in internal medicine, and then another two who graduated and are applying for residency, and my little brother is going to med school.”

Were you surrounded? “Yeah. I grew up with medicine.”

Is that the only reason that you selected this field? “No. I think that since I was a little kid, my dream was always to be a doctor before I even knew that people around me were doctors or that they were going to be doctors.” She said, “When I started med school, that was my plan A. I never had a plan B, medicine is so important, and I was just genuinely intrigued by the subject as well.”

She said that in medicine, she gets the chance to help people to take care of themselves but you also get an opportunity to form that connection to bond with them. “That’s a special connection,” she stated.

From her perspective, Dr. Sraow says that there aren’t enough physicians, and sometimes they tell you, the patient, ‘I don’t have time.’ That physician doesn’t have time that day, so you have to wait until the next day or the day after.” She said, “My illness is today. That doesn’t even necessarily differ among socioeconomic classes.”

Dr. Sraow had a second topic to discuss with Mega Doctor News; she says that in lower socioeconomic classes it is hard to get adequate healthcare or enough coverage.

Also, during a medical career, you interact with a lot of physicians, and sometimes that happens before you get into medicine. She noted that some of them have different ambitions in medicine, and treat medicine differently. “For some people, it is their job, for others, it is their life, and I think that I would do it differently, and that is to make sure I treat my patients as people and not a disease.” She continued, “It’s about that connection, and building upon it to establish better healthcare not just, ‘Ok, here’s a prescription, there you go, and that’s it.’ You only see them as a problem. You don’t see them as a person.”

Is it important for you to get to know them? “Absolutely.”

You are going to be an excellent doctor! “Thank you,” Dr. Sraow finalized. MDN