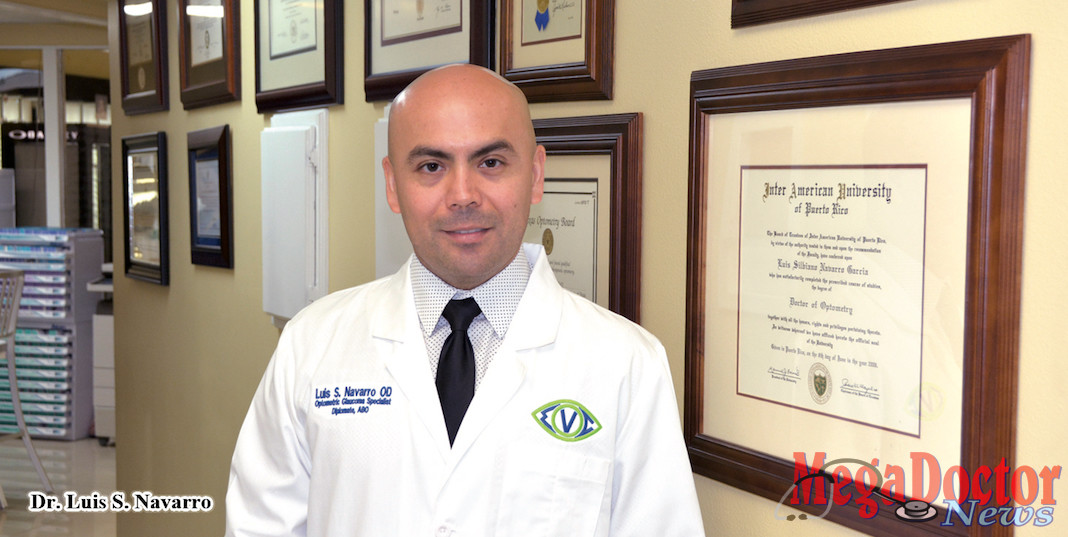 It only took him a visit to an eye doctor to decide his future. Luis S. Navarro is a doctor of Optometry. Today, he owns and operates Edinburg Vision Center, a successful optometrist office that brings solutions to patients. When Dr. Navarro was a young adolescent, his parents took him to see an eye doctor; it was a visit that changed his life. He said that when he was able to see clearly with his new prescribed eyeglasses, the only thing he wanted was to be an Optometrist. In a way he thought that it was an easy job, like he says, “They just prescribe glasses”.

“I was born in Chicago, Illinois in La Villita District on 29th and Holmen,” he told Mega Doctor News. He has many fond memories especially of when he was growing up. Today, it’s a different story; it hurts him to know that now it is gang infested.

After graduating from the UTPA with a bachelor’s in biology and a minor in chemistry, he left the Valley and he studied optometry at the Inter-American University of Puerto Rico’s School of Optometry. He completed his doctorate in optometry in 2006 with honors.

Dr. Navarro has demonstrated that he has maintained his knowledge of eye care. “I’m also an Optometric Glaucoma Specialist, which is the highest level to which optometry is practiced in the State of Texas.”

He added that the difference between an Optometric Glaucoma Specialist in Texas, and a regular Therapeutic Optometrist is that he can prescribe eye drops for glaucoma, and oral medications as well as topical drops for the eyelids, and for the eyes.

So, would that be a dual certification? “I would just call it more credentials,” he stated.

What brought you back to the Valley? “I knew I was going to start my career here. I developed real friendships in college that stayed here while I went away for more training.” However, he says there is a simple reason why he came back to and stayed, “I am comfortable with the warm and friendly people and I feel like I’m at home.”

Aside from having good friends and feeling good in the area, he had the assurance of an article he read while being a student. The article published by Review of Optometry magazine saying that McAllen-Edinburg-Mission was designated the fourth largest growing metropolitan area in the country. “I think that’s why I made up my mind that I wanted to come here.”

According to him, he didn’t know what he was getting into. “I thought this was going to be easy; I’d just prescribe glasses, and that’s it.”

Once he got out into the real world, then he realized that his new job required him to treat glaucoma, monitor diabetes, diagnose brain tumors, and do the right thing after diagnosis. “I’ve had patients that come here with brain tumors, and two days later they’re in a surgery room getting these tumors removed.” He said, “People with multiple sclerosis, and chronic diseases like arthritis which exacerbates dry eyes; I treat that.” Nevertheless, all this activity, he describes as exciting and challenging.

So no regrets? “No. I knew that I was going to do this at a very young age.” Together with no regrets, he has experienced many blessings. He admits that he didn’t know that he was going to own a practice. “I just happened to meet the right person at the right time. The doctor that owned Edinburg Vision Center was retiring, and I had just graduated. He and I agreed he was going to sell his practice to me, and that’s what happened.”

He pointed out that optometry is critical for the world. “In the United States, optometry has evolved well beyond in comparison to other countries.” He said, “Here we can prescribe eye drops for allergies, for infections, and we can also dilate patients’ eyes in the office. Whereas, in other countries, optometry hasn’t evolved to the point that we have here in the United States.” He credits the progress and evolution of Optometry to the fact that it is a legislated profession. He pointed out that you cannot do more for a patient, only what is already stipulated by legislation.

According to Dr. Navarro, an optometrist does 70% of all the eye care in the country. The other 30% is performed by ophthalmologists and your general practitioners and medical doctors that happen to treat a little eye infection sporadically.”

This information gives the reader the importance of this profession. “One critical part of this practice is that an optometrist, in this country, helps his patients by monitoring ocular complications from diabetes mellitus,” he stated. “Also, I have thousands of patients that I dilate once a year, checking them for diabetic eye disease that may evolve from having a diabetic condition that is not controlled.”

One area of this field that concerns him the most is the fact that there has not been an update on the optometric law in about sixteen years. “Consequently,” he says, “The surrounding states have better optometric laws, so that means that optometrists in New Mexico, Louisiana, and Oklahoma, can provide better eye care for their patients than we can here in Texas, and that bothers me.”

In simple terms, an optometrist has been working with antiquated laws that don’t even meet current standards if compared with other states. He said that over all those years, many developments in eye care have occurred, but nothing has changed in the state of Texas.

So these changes in the law should be done by a legislature? “Absolutely. It has to be done by the legislature. I know how to do a lot of different procedures because I attend national and state meetings where I learn about new procedures and prescriptions.” He said, “But I cannot perform these in Texas because the legislature hasn’t given me permission to perform them or prescribe these drugs, which I think is a bad thing for patients.”

What type of patients do you serve? “I help children, beginning with newborns; they could be a couple of days to a month old, to as old as a hundred.” Dr. Navarro has been in this practice since August of 2007. He said that he saw patients while they were in high school that now are professionals. One, in particular, is now an attorney, and another is a body builder. “He has the body of a young Arnold Schwarzenegger.”

One essential service of his practice that sets him apart from other practices is that most people will get their glasses either on the same day, or the following day.” He says that is a convenience for his patients. “We stock a lot of lenses that our competitors don’t stock, and we can also surface a lot of prescriptions that our competitors cannot do in office. They have to send out the work, while we do almost everything in-house.”

He said ‘almost everything’ because there are some prescriptions that they have to order out. But not for long he said. “Within the next couple of years, we hope to be able to do most jobs here in-house without having to order lenses.  We’re just going to keep growing our stock bank, and investing in more equipment so that our patients experience a different type of clinic compared to our competitors.”

Members of the association meet once a month, occasionally twice a month. “We provide educational courses for our doctor members so that they can take the education to the practices and be better doctors for their patients.” Currently, Edinburg Vision Center is under construction due an expansion; the aim is to have twelve exam rooms. He said, “Right now we see about 50 to 60 patients a day, between three doctors and technicians.”

Dr. Navarro likes to fly, especially in a Cessna. As he says, “The natural progression of driving is flying.” He also has a special love for music. “Before I was ever an eye doctor, I was a DJ. When I was a kid, I used to mix rap music, so I DJed almost every Friday and Saturday all throughout high school.” He performed at many birthday parties and quinceañeras in his neighborhood. “I still DJ, but it’s just something that I do for myself,” he stated. He is knowledgeable about different kinds of music like R&B, Rap and Hip Hop, and loves Salsa and Cumbia.

How would you like to be remembered when you leave this earth? “That’s a tough question. I’d like to be remembered as a good, decent optometrist. Maybe not the best one, but certainly always trying to do my best. As a good son to my parents, a good father to my kids, and a good boss to my employees, at least a fair one; I wish we were Google or Apple, and everybody had a six-figure salary.”

To finalize he expressed, “I’d like to be thought of as a person who saw the future of optometry, and every day went to work and tried to make his practice into that vision of the future.” MDN