HARLINGEN & BROWNSVILLE – From self-driving cars to millions of web searches every day, artificial intelligence is used in countless applications in everyday life.

“Artificial intelligence feels like it is two steps ahead of the game and has really played an important role in triaging some of the most complicated strokes we care for at Valley Baptist,” he said.

When a patient who is suspected of having a stroke arrives at Valley Baptist, within minutes they receive a battery of tests to determine the severity of any potential stroke. These tests include a full array of images taken of the patient’s brain as well as the blood vessels leading to the brain. Some patients also receive CT perfusion imaging, which shows physicians detailed information on blood flow being received by different areas of the brain and which parts are potentially salvageable during treatment.

The artificial intelligence is used to analyze these imaging results, alerting physicians and healthcare providers when it discovers abnormalities, which in turn significantly improves treatment times through earlier diagnosis, Hassan said.

“The artificial intelligence system analyzes the CT angiogram for a large vessel occlusion, then pushes an alert to all team members’ phones when it detects one,” Hassan said. “The use of artificial intelligence has improved our treatment times, and we all know that time is brain in relation to dealing with stroke, because 1.9 million neurons die every minute a stroke is untreated.”

Large vessel occlusions are strokes that are caused by a blockage of one of the major arteries of the brain. These strokes make up approximately 20 percent of all strokes, Hassan said, but carry with them a higher risk of long-term disability or death than other types of stroke.

“The goal is to use tools like artificial intelligence to send more of our stroke patients home with fewer deficits than ever before,” Hassan said.

A recent study published in Interventional Neuroradiology showed that the use of artificial intelligence in the treatment of large vessel occlusions had a number of benefits for patients, including reduced transfer times, shorter hospital stays, and ultimately better outcomes, Hassan said.

“Our studies show that the incorporation of artificial intelligence to coordinate care for ischemic stroke patients is associated with significant time savings across a hub and spoke model and also at comprehensive stroke centers,” said Hassan. “Because we know that ‘time is brain,’ these improvements could lead to significant advances in functional outcomes, reduced mortality and shorter hospital stays.”

Because large vessel occlusions, while extremely dangerous, do not make up the majority of strokes, Valley Baptist upgraded its artificial intelligence capabilities to allow physicians to harness its power to treat a wider array of stroke patients, including those with suspected intracerebral hemorrhaging.

Intracerebral hemorrhaging is the most common type of hemorrhagic stroke, and occurs when an artery in the brain bursts, flooding the surrounding tissue with blood. The build-up of blood puts increased pressure on surrounding brain cells and can lead to long-term disability and death. Artificial intelligence can now detect these brain bleeds in a patient’s imaging and alert stroke teams at Valley Baptist to take immediate action.

Dr. Luis Gaitan, Medical Director of the Stroke Program at Valley Baptist Medical Center-Brownsville, said the use of artificial intelligence in the treatment of stroke helps physicians better coordinate patient care when quick decisions are a critical component of positive outcomes.

“The use of artificial intelligence at Valley Baptist-Brownsville allows neurologists to make rapid decisions related to a patient’s treatment,” he said. “Patients suspected of having a stroke receive imaging upon their arrival to the hospital, and neurologists are able to see those scans immediately on their phones or computers. The artificial intelligence will alert neurologists to take immediate action when it detects a large vessel occlusion in those images, which is so important because when dealing with stroke, time is brain.”

The use of artificial intelligence is the just the latest advancement in Valley Baptist Health System’s quest to provide the community with high-quality stroke care. Valley Baptist Medical Center-Harlingen became the region’s first certified Comprehensive Stroke Center in 2016. In addition to participating in the DAWN study, Valley Baptist also played a role in the SWIFT PRIME trials, which proved the benefits of endovascular treatment of stroke. Valley Baptist-Brownsville and Valley Baptist-Harlingen are also recipients of the American Heart Association/American Stroke Association’s Get With The Guidelines Target: Stroke Honor Roll Elite Plus Gold Plus Quality Achievement Award. 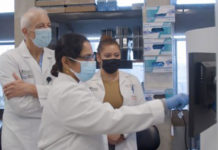 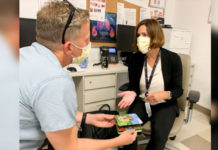 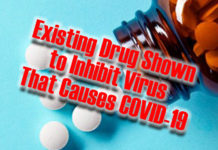