Harlingen, Texas – Sept. 2015 – The University of Texas Rio Grande Valley and the U.S. Department of Veterans Affairs are looking into ways they can collaborate to improve healthcare access for area veterans.

The UTRGV Regional Academic Health Center was the venue for two roundtable discussions – one with community leaders and another with veterans.

The event was hosted by U.S. Sen. John Cornyn, with the participation of Texas Gov. Greg Abbott, U.S. Department of Veterans Affairs Secretary Robert A. McDonald, and UTRGV leaders that included Founding President Guy Bailey, UTRGV School of Medicine Inaugural Dean Dr. Francisco Fernandez (who was out of town and participated via teleconference), and Dr. Leonel Vela, founding dean of the RAHC and now UTRGV senior associate dean for education.

“It speaks volumes about the care that our elected officials have for this region for them to make time to meet with their constituents personally,” Bailey said.

With more than 1.6 million veterans living in Texas – more than 40,000 of them in the Valley – access to health care for veterans is vital, officials said. “While the VA has made improvements in access to care, it still has a long way to go,” McDonald acknowledged.

Dean Vela said the School of Medicine’s predecessor, the University of Texas Health Science Center at San Antonio’s Rio Grande Valley program, has a relationship with the VA, including having medical students and residents rotate at the VA clinic in Harlingen, and having the VA fund medical residents for the internal and family medicine residency programs.

Forming partnerships with medical schools, such as the one currently pending accreditation at UTRGV, allows the VA to train the doctors who can then work in the VA system, McDonald said.

Dean Fernandez said the VA is celebrating the 70th anniversary of the establishment of educational partnerships between the VA and medical schools in the United States to train physicians in caring for veterans.

“It is one of the best programs in the country to provide clinical training in medicine and 40 other healthcare professions,” he said. “We are in the right place at the right time to be innovative and resourceful in our search to co-lead new educational, clinical and research programs to benefit our veterans.”

McDonald concurs on the potential for collaboration with UTRGV. “The opening of the medical school here at UTRGV is a prime example of the kind of partnerships that we want,” he said.

The VA is interested in working with the UTRGV School of Medicine on research, medical residency programs and other initiatives, he said, adding that he was greatly impressed with the UTRGV Simulation Center.

He said the VA also would be interested in working with UTRGV on simulation programs for medical use. “These types of strategic partnerships can lead to better care for our veterans, and that’s why they’re so important to us,” McDonald said.

Asked whether a full inpatient care wing could be set aside at the School of Medicine for veterans, McDonald said, “All options are on the table. The only thing that matters is how to get better care for our veterans.” Bailey added that UTRGV is happy to work with veterans and the VA to provide healthcare in a way that best suits the veterans and the VA.

“Our job is to serve,” Bailey said, “so we want to be helpful in whatever way we can.”  MDN 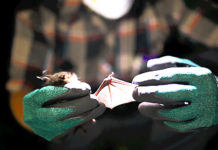