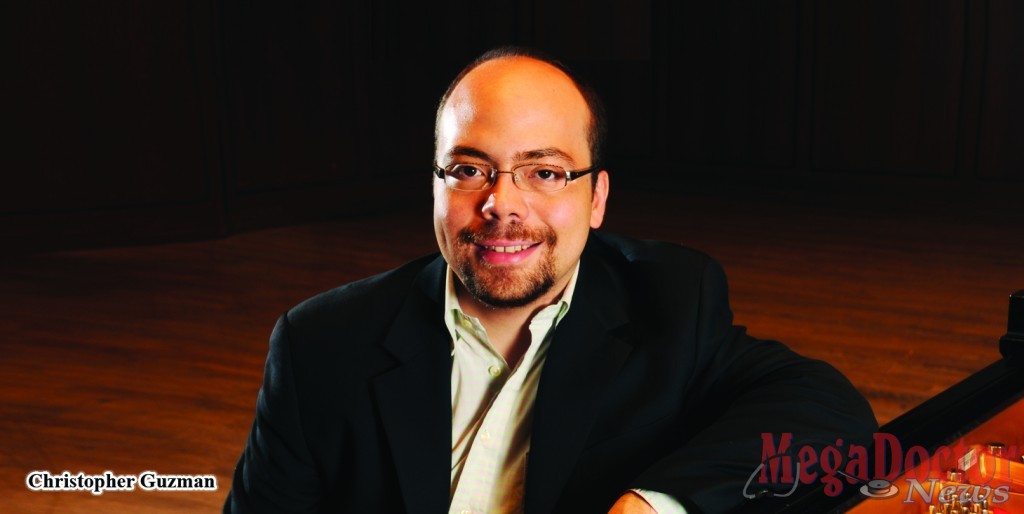 [October 2, 2014], McAllen —The Valley Symphony Orchestra presents the second installment of the major work series on Thursday, October 23rd at the Edinburg Conference Center at Renaissance located at 118 Paseo del Prado from 8:00 – 10:00 p.m. The Orchestra will transport you to Eastern Europe in a concert entitled, “The Russians Are Coming,” featuring internationally renowned pianist, Christopher Guzman who will interpret Tchaikovsky’s Piano Concerto No. 1, B-flat minor, Op. 23. Music Conductor/Director, Dr. Peter Dabrowski will conduct the orchestra in a performance of Mussorgsky’s “Pictures at an Exhibition.”

Piano Concerto No. 1 by Pyotr Tchaikovsky is one of the monumental pieces of the piano repertoire. Its structure was very unusual for its time. Tchaikovsky first showed it to Nikolai Rubinstein a teacher of composition and renowned pianist at the Moscow Conservatory, hoping that he would perform the piece. Even though Rubinstein rejected the piece, Tchaikovsky remained firmed in his conviction that the concerto was worth performing as he originally envisioned it. He entrusted its premiere to German pianist Hans von Bülow, who was preparing for a tour through the United States. The concerto was premiered in Boston on October 1875, and has remained in the standard repertoire ever since. Today the concerto is appreciated for its singular musical traits. The virtuosic opening theme of the first movement is like a concerto in itself; the pianist vigorously accompanies the luscious melody played by violins before it breaks into a quasi-cadence to then return the melody back to the orchestra. The rest of the concerto features the lovely romantic melodies, contrasts in tempo and texture, and elements of Russian folklore that the composer is known and loved for.

Christopher Guzman, a native Texan, will play the piano solo. Dr. Guzman maintains an international performing schedule as well as an active teaching career in the School of Music of Penn State University. He has won prestigious competitions in Europe, Asia, and the United States, including the Walter M. Naumburg competition (New York), the Seoul International Piano Competition (South Korea), and the Concour International de Piano d’Orléans (France). He has performed with some of the finest orchestras in the world including the Berliner Philharmoniker, the Philadelphia Orchestra, the New York Philharmonic, and the San Francisco Symphony. Dr. Guzman holds degrees and diplomas from the Juilliard School, the New England Conservatory, and the University of Texas at Austin.

Modest Mussorgsky was a contemporary of Tchaikovsky, but whereas Tchaikovsky sought to integrate elements of Russian music into the cosmopolitan Romantic language of his day, Mussorgsky sought to develop a more uniquely Russian musical idiom. He is often associated with the group of Russian nationalist composers known as The Mighty Five. The Pictures at an Exhibition, a set of pieces inspired by paintings by Viktor Hartmann, is perhaps Mussorgsky’s most performed composition in symphony halls. The piece begins with a “promenade” a stroll that the viewer/listener takes as he or she approaches a painting. Variations of the promenade occur at various points throughout the piece as the viewer moves from one painting to the next, always colored by the mood of the painting just contemplated. The paintings themselves represent various aspects of Russian culture and identity, from folk characters like the witch Baba-Yaga, and gnomes, to scenes from Russian life (such rich men approached by beggars), and even architectural landmarks, like the old castle, and the majestic plans for the never-built Great Gate of Kiev. Interestingly, Mussorgsky did not originally write this piece for orchestra, but for piano. However, his compositional style was so vivid that many composers could not resist to paint Mussorgsky’s music with the colors of the symphony orchestra. French composer Maurice Ravel, one of the most renowned orchestrators of the early twentieth century wrote what most consider the definitive orchestration of Pictures.

Don’t miss this wonderful event. Tickets start at $25 for Back House, $35 for Front House and $45 for Orchestra Level tickets. Senior, student and group discounts are available. Call, click or visit the VSO Box Office, located in the Chase (Neuhaus) Tower, 200 South 10th St., Suite 104 in McAllen–open weekdays from 9:00 AM to 5:00 PM. Get the best possible seats available and don’t miss out on Concert II – The Russians Are Coming. Call the VSO Box Office at (956) 661-1615 or online at www.valleyorchestra.org.