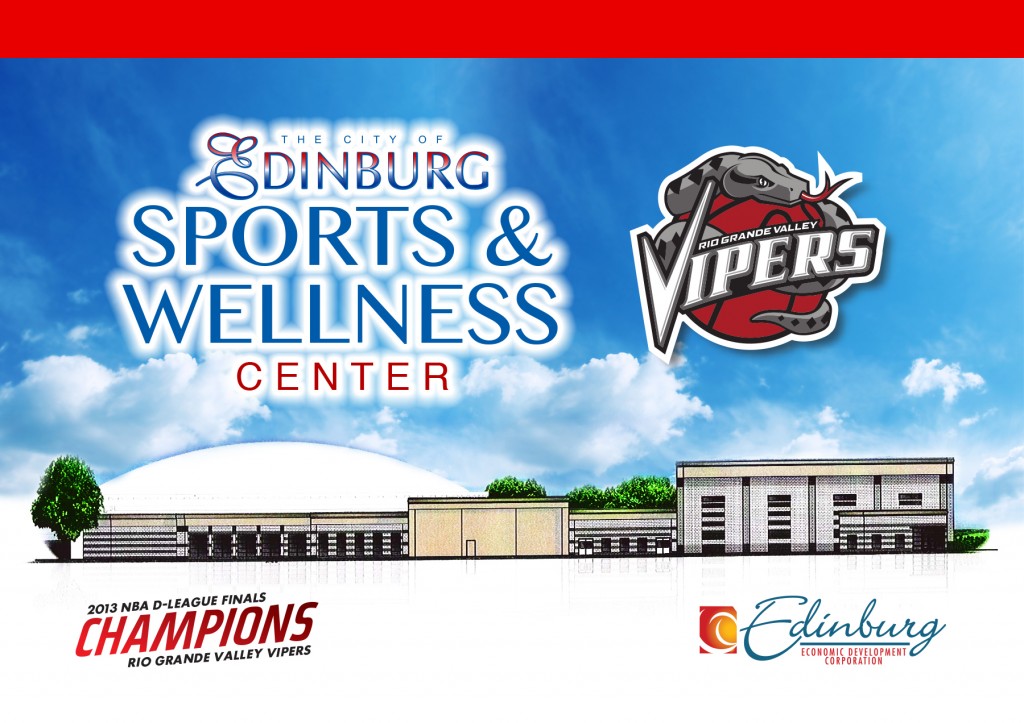 MCALLEN, Texas, Sept. 30, 2013 – The NBA Development League Rio Grande Valley Vipers, the City of Edinburg and the Edinburg Economic Development Corporation announce the construction of the 84,000-square-foot Edinburg Sports and Wellness Center at 315 East Palm Drive in Edinburg, Texas. The facility is slated to open in March 2014.

“This is a fantastic project, one that will create new jobs, as well as, recreational opportunities to the City of Edinburg. It will completely transform the current Parks and Recreation Center into a new amenity that will complement the surrounding community,” said Mayor Richard Garcia. “This project shows the tremendous opportunity Edinburg has to offer, and I am proud to have helped move the redevelopment of the Parks and Recreation center forward.”

The building will be the first of its kind in South Texas. The facility is a joint partnership between the RGV Vipers, the City of Edinburg and the Edinburg Economic Development Corporation. In addition to serving as the official practice facility of the RGV Vipers, the center will serve as a community hub for wellness and education for Rio Grande Valley residents of all ages.

“The Rio Grande Valley Vipers are proud to partner with the City of Edinburg as it continues to evolve and grow as the center of government and education in the Rio Grande Valley,” said RGV Vipers President Bert Garcia. “Not only are the Vipers eager to have our own practice facility, but we are excited to be able to share it with the RGV communities that support us. We are looking forward to this opportunity to mentor young athletes and have more interaction with our fans.”

The Edinburg Sports and Wellness Center will serve both the Vipers and its surrounding community. The first-class facility will feature eight basketball courts, volleyball courts, four dance studios, computer labs and a gaming room. Space will be available for boxing, Mixed Martial Arts and group fitness classes. Youth sports organizations, such as the Amateur Athletic Union (AAU) will also be able to use the facility. The center will offer onsite restaurants and dining areas. The Edinburg Sports and Wellness Center will also serve as a training camp home to the Houston Rockets during future RGV Rocket Launch events.

“This historic announcement represents a great achievement for the RGV Vipers and the City of Edinburg” said Economic Development Corporation Executive Director Agustin “Gus” Garcia. “The current administration has long been committed to revitalizing the city’s quality of life and is partnering with the EEDC and the RGV Vipers to provide one of the largest sports and wellness center facilities in the valley. In doing so, this partnership will contribute to the area’s long-term economic growth.”

“Until now, there was an under-served market in this area in terms of age-appropriate performance training for younger athletes,” said Councilmember Homer Jasso, Jr. “Today’s athletes start training and preparing earlier to realize their dreams of playing elite sports. The Edinburg Sports and Wellness Center programs will be specifically designed to give kids a foundation for reaching their greatest athletic potential in a safe and supervised environment.”

For more information about the 2013-14 RGV Vipers season or the Edinburg Sports and Wellness Center, contact the RGV Vipers at 956-972-1144.

About the RGV Vipers and NBA Development League

The free event, hosted by TTUHSC El Paso, aims to build interest in the health sciences at a young age.
- Advertisement -