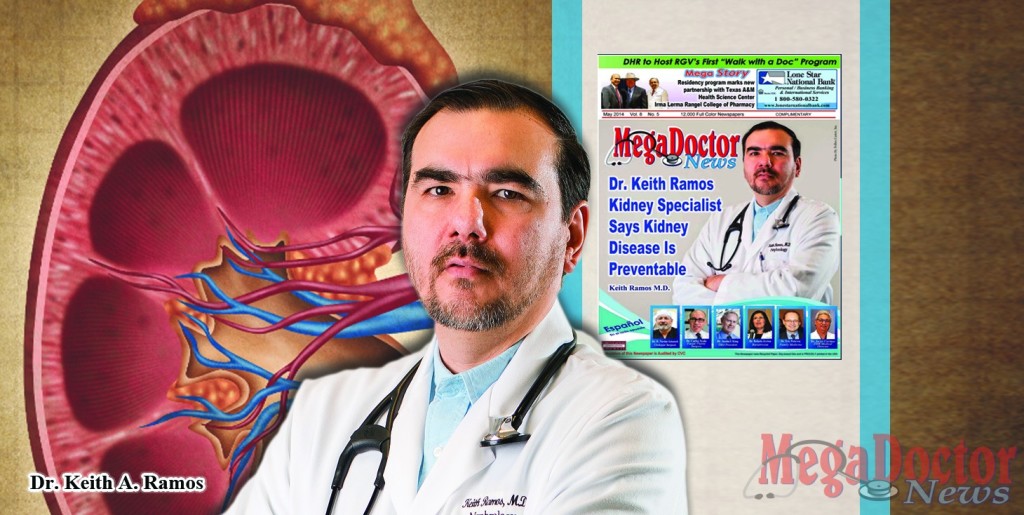 The medical community has been fighting kidney disease for years. Today, great advancements in kidney transplantation, and effective new medications are making a huge difference in this fight. There have been new technological advancements and new medicines have come in the market, which were not available 10 years ago. These new developments and nephrologists specializing in this field are a great combination and formidable fighters against this disease.

We had an in-depth conversation with Dr. Keith A. Ramos, a Nephrologist, who runs three offices in the Rio Grande Valley under the name Kidney Doctors of South Texas, P.A.

Dr. Ramos explained the importance of learning more about the disease in order to prevent it. He pointed out that 1 in 5 American adults is at high risk for developing kidney disease today.

According to the National Kidney Foundation, kidney disease often has no symptoms; it can go undetected until it is very advanced. Dr. Ramos points out that early detection and treatment can slow or prevent the progression of kidney disease.

Dr. Ramos chose the medical profession at an early age. He grew up in a small community by the name of Barceloneta, Puerto Rico. “I was about ten years old when I first met Dr. Rivera, the only family doctor in town.”

He said that from there on the idea of becoming a doctor never left his mind. He felt that the services that Dr. Rivera was providing for the small village were of great benefit for the community.

“Dr. Rivera motivated me with his kindness; he was always ready to help his patients no matter the time of the day or night.”

Dr. Ramos was born in New York City in 1968, and was an adopted child to Jesus Ramos and Laura Diaz both from Barceloneta. After three years living in New York, his adopted parents took him to Puerto Rico. “My adopted parents were afraid that my biological parents would take me away.” He said that he grew up in front of the beach and mingled with the fishermen.

Did you ever find your biological parents? “No, I know that my mother was Polish, and my father was from the Philippines. I learned this through my stepsister who talked with the caseworker. But I also learned through a DNA test that confirmed what I was told by my stepsister.”

He went to college in Puerto Rico and obtained a scholarship from the U. S. Army to study medicine. Dr. Ramos said that his father, a janitor, instilled in him the principles of accepting responsibility and working hard. “My mother passed away when I was twelve years old.”

“I graduated from medical school in Puerto Rico in 1994 from Universidad Central del Caribe. After that, I joined the U.S. Army because I had a scholarship with them that paid my medical school, so I did one year of internship in El Paso, Texas.”

Once he finished in Kentucky; he went back to Puerto Rico and did three years in internal medicine training at the Dept. of Veterans Affairs Medical Center, followed by two years of Nephrology Fellowship.

Dr. Ramos came to the Valley because during the training program he met someone from South Texas. “I first got a call from a colleague in Laredo Texas to interview and after that I got called for an interview in McAllen—and stayed here.” Dr. Ramos said. Two years later in 2005, he decided to start his own practice, Kidney Doctors of South Texas, P.A. in Mission, Texas.

Dr. Ramos is married to Zoraly Nuñez. They met in a hospital in Puerto Rico as they worked during the summer time. “I was 24 years of age, and she was 19,” Dr. Ramos said. “We married two years after we met, and we have been married and very happy for 20 wonderful years. We have one son named Keith and he is 17.”

Is your son following in your footsteps? “He is not sure yet, however, he has not made up his mind about what he wants to do in the future.”

Mega Doctor News published this article on May 2014, to continue reading the rest of the story follow the link that will take you directly to the complete to the article: https://j.mp/drkeithramos MDN