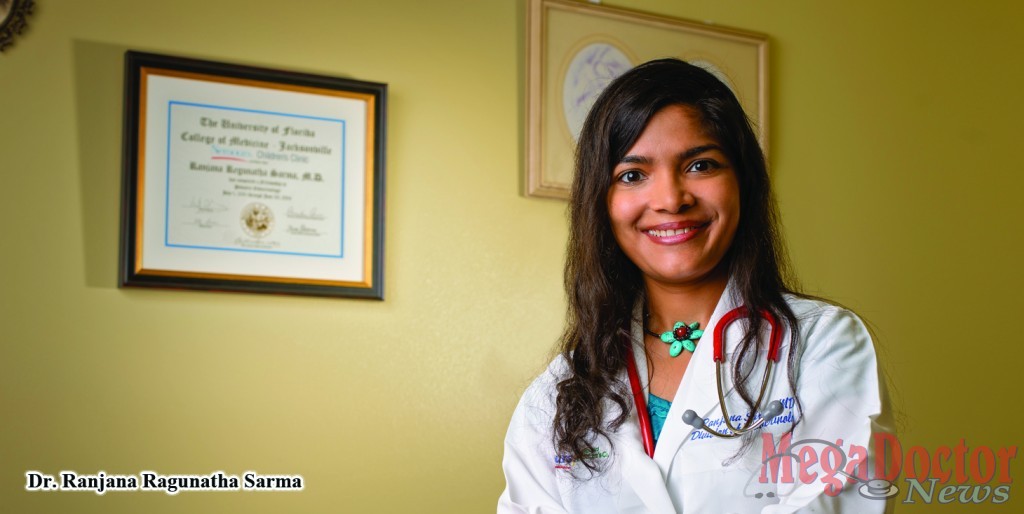 In my lifetime, Dr. Ranjana Ragunatha Sarma is the second person that I meet that married through an arranged marriage, a tradition very common throughout the world until the 18th century. Even though this tradition was also popular in neighboring Mexico, until today I haven’t met one single person where someone else arranged the marriage and becomes final. She says that the parents in her country still use the tradition.

Here in America, during the 21st Century that tradition is no longer used, but based on the success of the arranged marriages in South Asia this could very well be part of the solution of the rampant mismatched couples in this country.

As is the case of Dr. Sarma born in Bombay India her parents arranged her marriage. Dr. Sarma recently arrived to South Texas; she is the first and only Pediatric Endocrinologist that sets a practice in the Valley. She is married to Mr. Shriram Krishnan born in Chennai, India.

Her husband Shriram is a Strategy Consultant. He has 3 degrees – a bachelor of engineering, and 2 masters degrees from the United States. He holds a master of electrical engineering and then he completed an MBA at the case Western Reserve University in Cleveland.

He has been working for a top tier global strategy consulting company for the last seven years before deciding to run Genesis Pediatric Endocrinology with his wife as a team.

Harikrishnan, Shriram’s father is an engineer and MBA and his mother Nandini is a medical doctor. Both are home in India. Shriram has a younger brother who just finished his master of engineering from Georgia Tech in Atlanta and is working for Qualcom in Boulder Colorado.

How did you two meet? “That is an interesting question,” she immediately answered. “We still follow the arranged system of marriage in India. Our parents actually introduced us to each other.”

She pointed out that their parents found and matched their profiles in a database through the Internet. “This is a database where all the profiles for different boys and girls are,” she said.

According to her, once the profiles match, the parents meet first among themselves and then the ceremony of introduction of both prospects. “That’s how we met, and then we liked each other and then …”

Any children? “Not yet.”

How long did the process of marriage arrangement take? “We started talking in July of 2011 and then we finally got married in January of 2012. It took at least six months for us to meet, get to know to each other and finally agree to a marriage. The wedding was in India. Actually, it was a three-day wedding,” she told Mega Doctor News.

Dr. Sarma said that in India the marriage arrangements are very common and a high percentage of marriages are finalized with high success. “But it’s not that strict anymore. It’s a more lenient system in the sense that if the boy and girl don’t like each other they can say no.”

But when the boy or girl is not compatible with each other, what happens? “There’s still a way out even before they get married but I would say the majority, about 80 to 85 percent still go that route, fascinating system,” she said.

Dr. Sarma is a young doctor, but at her age she is brilliant and passionately dedicated to her field. She pointed out that in India, education is a big thing. “They always want us to get at least a masters degree. There’s no compromise with that,” she said.

She told Mega Doctor News that her father instilled in her honesty, integrity, hard work and ability. “That’s what I mainly got from my dad that I still value.”

What about your mother? “I think from her I got the passion and the eagerness to learn and keep learning observation skills which I think are very important for a physician and determination, never to give up.”

Dr. Sarma comes to the Rio Grande Valley with excellent credentials; she graduated from Trivandrum, Medical College University of Keralla India in February of 2007.

How many years have you been in your practice in this field now? “I actually just finished my pediatric endocrine fellowship at the end of June 2014. Since I finished medical school I did three years of Fellowship in Pediatric Endocrinology at the University of Florida, College of Medicine Jacksonville, Florida and three years of Pediatric Residency at Driscoll Children’s Hospital, Corpus Christi, Texas. I’ve been in training for the last six years since I completed med school,” she said.

Her specialty is one badly needed in this area, the alarming prevalence of diabetes not only resides with the adult community the children and adolescents in this area are also victims of this disease.

Can you elaborate more about endocrine? “Sure, any kid who has any hormonal disorders like any problem with growth, puberty, overweight or sometimes they can have problems with their pituitary gland or adrenal gland or thyroid problems, I’m a specialist who would be taking care of kids with those problems. Diabetes and obesity also comes under that,” she said.

She told Mega Doctor News that she wanted to become a doctor to make an impact on the community and especially now. She said, “During residency I did see that a lot of people from the state of Texas traveling to Corpus Christie and San Antonio for their endocrine care. Having done the specialty I have a chance to serve the community here, to make sure that the people don’t travel far for their care.”

What challenges have you encountered in your profession? “I would say the compliance in medication just like any other physician field diabetes particularly among the other endocrine disorders is a chronic condition. It involves a lot closed care. Kids have to check their blood sugars eight to ten times a day, give four to five shots a day. They tend to forget. Obviously, you can’t expect eight or nine-year-olds to keep in mind brushing or showering let alone take four of five injections a day.”

She said that one of her duties is to keep reminding their parents that they still have to watch and observe the kids closely and make sure that they are complaint.” I think that’s a battle that I’m always facing and the other big challenge is obesity.”

Dr. Sarma said that advising people to make major changes to their diet and the lifestyle because of one of the complications is type 2 diabetes that is preventable.

How can people prevent it? “Type 2 is preventable but it involves hard work, adopting a healthy diet and adding exercise.”

She said that the process at the beginning involves a lot of patience because it takes talking to them and helping them implement the right plan for each one of them. She said, “Just like any other treatment in the beginning you can face a lot of resistance. I think that’s the biggest challenge that I would face but I’m ready and I’m eager to work with them.”Dr. Sarma has been a keen advocate of the diabetes camps. Even during her residency years, she participated in the annual Lions Camp at Kerrville, Texas. “I did that three years during residency and then I went to the Diabetes Camp Jada in Jacksonville for two years.”

This year she also attended the event with the South Texas Juvenile Diabetes Association at The University of Texas-Pan American (UTPA).

She already sees her clinic being a good alternative for the patients who need endocrine and diabetes care all over the Valley. “I do see myself expanding to serve the communities of Cameron and Hidalgo Counties and maybe someday even Starr County.”

It is important to say that Dr. Sarma said that since childhood she always wanted to help people. “I wanted to do something to change the life of at least one person in the world and what better field than medicine to do that.”

To get rid of stress, Dr. Sarma exercises and listens to music and she feels excited because there’s a lot of exciting research in the field of diabetes that relates to kids.

She also said about type I diabetes, when the kids are insulin dependent from day 1, pointing to the fact that there are a lot of studies in terms of transplantation. She said, “The artificial pancreas and some day I’m optimistic that we will find a cure that will save all these young people by reducing the number that are insulin dependent as well as the sugar checks.”

Her hope is to someday see kids living a long and peaceful life once the research comes out. “That is something I’m very excited and passionate about.”

Dr. Ranjana Ragunatha Sarma has been chosen to be our Mega Doctor of August 2014 because as you can tell she is a good proponent of eating right and fitness, a very important combination, and with the right advice from her as a physician it just might take care of most of the health problems of our society.

Obesity and Its Associated Complications