Scientists at the University of Arizona Mel and Enid Zuckerman College of Public Health launched Kidenga, a free smartphone app for Android and iOS that allows users to report mosquito activity, symptoms of illness and help detect outbreaks.

is a community-based disease detection system that allows the team of public health investigators to track day-biting mosquito populations within a community and identify people who have symptoms of illness. The app also provides users with county-level confirmed case information, educational materials and up-to-date news on mosquito activity.

The U.S. Centers for Disease Control and Prevention reports 17,694 people in U.S. Territories (American Samoa, Puerto Rico, U.S. Virgin Islands) and 3,176 in the continental United States have been infected by the Zika virus, which is contracted both by mosquito bite and sex.

To help with that effort, the CDC and the University of Arizona have appointed Josh Ramirez, CPM Director of Health & Code Enforcement from the City of McAllen, to be the U.S. South Region Spokesperson for the implementation of the Kidenga App. It is Ramirez’s extensive knowledge and expertise in mosquito control, and mosquito surveillance programs that prompted the CDC to requested that Ramirez assist in the development and implementation of the app and to serve as the spokesperson.

“The success of the app depends on the passion of the person who will promote the importance of mosquito abatement and awareness, especially because of the diseases they carry,” said Roel “Roy ” Rodriguez, P.E., City of McAllen City Manager. “Josh has already tirelessly been promoting this message here locally and will be just as dedicated to make the area aware of the app and the benefits it will provide.”

Mosquito-borne diseases like Zika, dengue and chikungunya are a growing threat to the U.S. and global communities. Symptoms range from mild to severe and many cases are never reported through traditional surveillance. Prevention and control efforts only can be effectively targeted when public health professionals have information on where and when diseases are occurring.

To help public health agencies detect these viruses as early as possible, researchers at the UA Zuckerman College of Public Health are looking for “citizen-scientists” to use Kidenga to help collect data on Aedes aegypti, the mosquito that transmits Zika, dengue and chikungunya and other diseases. Any resident of the United States and Canada over age 13 can use the app.

Once a week, Kidenga will ask users to report mosquito activity and symptoms near their home. Users also can view aggregate information from other user reports within their zip code; get the latest news on Zika, dengue and chikungunya; and learn how to protect themselves, their family and community from diseases spread by mosquitoes.

“If enough people use the app it may be able to detect zip codes that appear to have an uptick of suspicious symptoms,” said Kacey Ernst, PhD, MPH, infectious disease epidemiologist at the UA Zuckerman College of Public Health. “This early alert is critical to reduce or prevent further spread of the virus. Communities can benefit from both the educational information in the app as well as the data it is generating.”

Users in Arizona, Florida and Texas, where mosquito season is approximately June through October, will have access to confirmed Zika, dengue and chikungunya case information by county. The research team will focus on rolling out new states with attention to higher-risk areas moving forward.

Not all of the United States has the Aedes genus of mosquitoes so Kidenga focuses on those areas with the highest risk of transmission. Florida and Texas have some of the highest Aedes aegypti populations in the country and both states have had previous outbreaks of dengue. Florida has ongoing Zika transmission and had one locally acquired case of chikungunya in 2014. Arizona was included because of well-established Aedes aegypti populations, significant potential for viral introduction, and the vector (mosquitoes and other agents that transmit disease) control operation in Maricopa County to validate data. 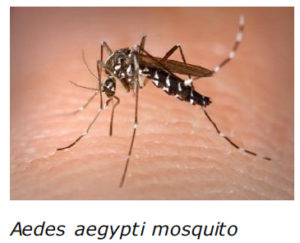 Dr. Ernst says that controlling Aedes aegypti is one of the most difficult tasks that public health officials are struggling to achieve to reduce transmission risk. “It requires buy in ranging from grassroots community initiatives to government-operated programs. With more information, we hope that more people will join the fight to control these mosquitoes.”

Traditional surveillance of mosquito-borne diseases relies on routine tracking of individuals who seek care, get tested and get reported to the health department. While this is the most valid way to determine cases, it may miss people who are not seeking care or don’t get tested. Sometimes people with these diseases have no symptoms, or have mild symptoms, and may not go to the doctor. Since these diseases can have very serious consequences, it is important that public health agencies know when these diseases may be circulating in a community.

The research team hopes to work with health departments and mosquito-control districts in high-risk areas to evaluate the validity of the data reported into Kidenga. This kind of disease detection has been done in the United States and other countries to monitor the flu, and has been effective in detecting outbreaks earlier.

Kidenga is a collaboration between the UA College of Public Health and the UA Bio Computing Facility (BCF) at the Arizona Research Laboratories. Students developed the mobile device application under the direction of Nirav Merchant, MS, director of information technology at the Arizona Research Laboratories and director of BCF. Significant support also was provided by scientists at the U.S. Centers for Disease Control and Prevention and Skoll Global Threats Fund.

“This is a timely project, very few health surveillance, citizen science apps focus on managing the contributed data, extracting value and providing verified information back to participants. Kidenga has a nice balance that allows researchers and participants to help each other, making good use of mobile technology,” said Merchant.

The UA undergraduate students who worked on this project come from the computer information science and engineering disciplines. “They have rigorous software engineering training, and use what they learn to work on research projects as contributing junior software engineers,” added Merchant.

Dr. Ernst believes the app will keep growing in functionality. “We already are envisioning how we can better help communities learn how to control mosquitoes and the diseases they carry, through games, climate-based alerts and other strategies to keep people engaged and knowledgeable. Aedes mosquitoes can transmit many arboviruses—dengue, chikungunya, yellow fever, Zika—and several recent reports point to the circulation of another virus, Mayaro, in Haiti.”

Kidenga is available for Android and iOS. For more information, please visit the website at kidenga.org

For information about the symptoms of Zika, dengue and chikungunya visit: https://www.kidenga.org/mosquito-smart/diseases

A transcript of Dr. Kacey Ernst’s testimony before the U.S. House of Representatives Committee on Science, Space and Technology is available here.

The UA has created a webpage to assist members of the media in their coverage of the Zika virus. Images, video and more can be found at httpss://uanews.arizona.edu/zika

About the University of Arizona Health Sciences

The University of Arizona Health Sciences is the statewide leader in biomedical research and health professions training. The UA Health Sciences includes the UA Colleges of Medicine (Phoenix and Tucson), Nursing, Pharmacy and Mel and Enid Zuckerman College of Public Health, with main campus locations in Tucson and the growing Phoenix Biomedical Campus in downtown Phoenix. From these vantage points, the UA Health Sciences reaches across the state of Arizona and the greater Southwest to provide cutting-edge health education, research, patient care and community outreach services. A major economic engine, the UA Health Sciences employs almost 5,000 people, has nearly 1,000 faculty members and garners more than $126 million in research grants and contracts annually. For more information: https://uahs.arizona.edu

These services have patients use smartphone apps or other digital monitoring features to answer questions related to medicine dosage, minor health ailments and dietary restrictions.

Dr. Choi said many teens still choose to vape, and a nicotine addiction can affect their brain development.