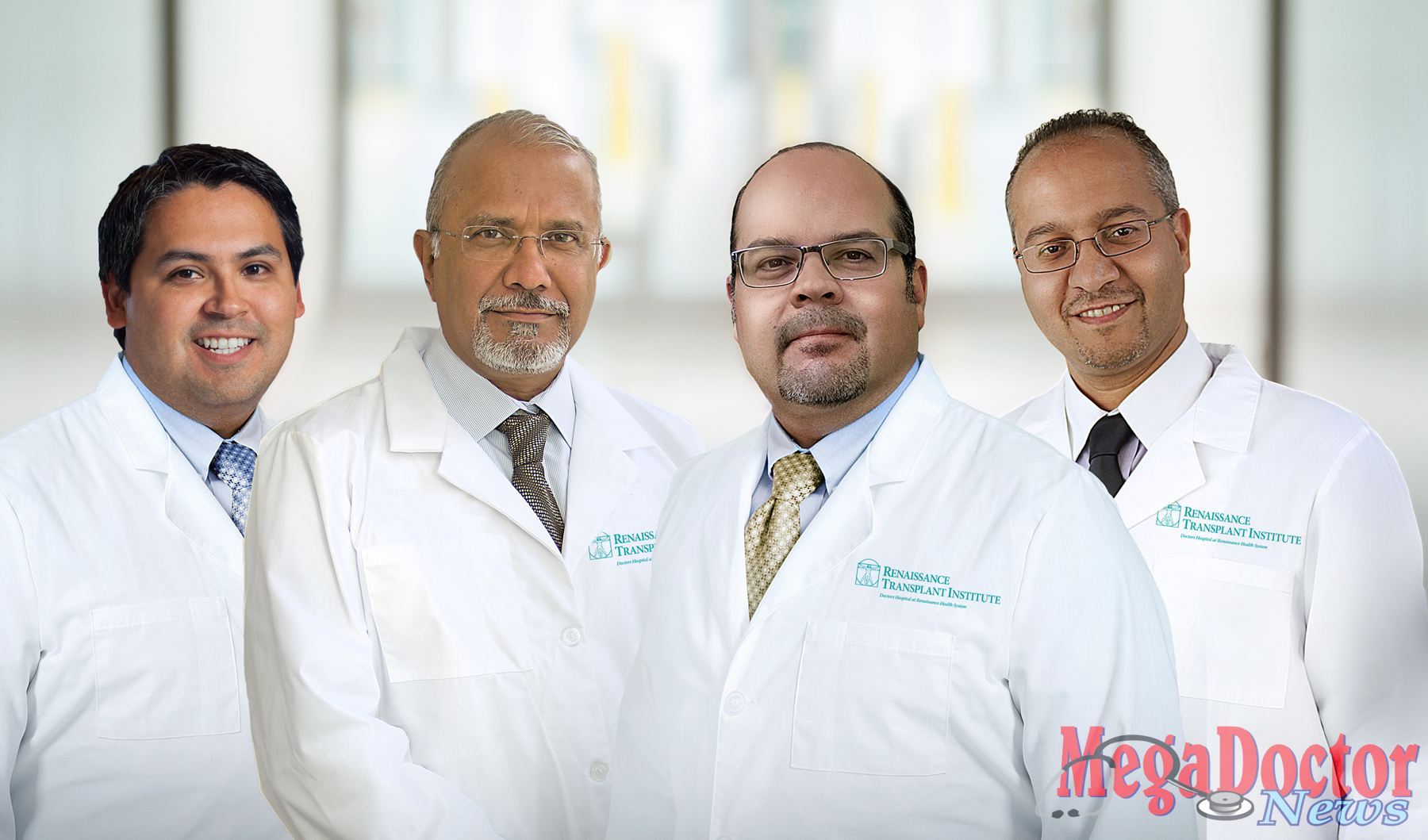 Daughter donates kidney to her father to save his life

As originally published by Mega Doctor News in its newsprint edition April 2017.

Castañeda said, “This is a very special day for us. It’s a celebration of life.”  She praised the amazing team of talented physicians, nurses, and most of all their first patients. “Thank you so much again, Janett Arambula and Gerardo Hernández; thank you for your courage.” 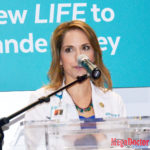 The first speaker was Laura Disque, MSN, CGRN. Disque is the Transplant Administrator for the Renaissance Transplant Institute. She thanked daughter and father, Ms. Janett Arambula, the kidney donor as well as the kidney recipient, her father, Mr. Gerardo Hernandez. “It has been one month and six days I believe since your surgery.” Disque said, “And look at them, amazing.”

Disque stated that the kidney transplantation success was a team effort; a combination of great patients and a talented group of physicians. “We’re extremely proud of them, for the hard work that they have done. And I would like to thank our administration for all the support. This has been quite a task and we’ve had a 110% support,” she said. 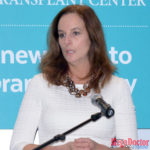 Jennifer Milton, who addressed the attendees, is the Director for Transplant Services at the University Transplant Center and Clinical Assistant Professor UTHSCSA. She was introduced as “the fire-starter”. “I have great admiration for Jennifer and all that she does for the Rio Grande Valley,” Castañeda stated.

“I’ve been a part of this for 18 months and I’m so proud of Doctor’s Hospital At Renaissance, the community, and how they’ve come together.” Milton said, “I’ve been in Transplant for 23 years, and what we are is stewards of that gift, we’re stewards of donor families who say yes to donation because in the worst moment of their lives they’re thinking about other people.”

Milton commended Doctor’s Hospital At Renaissance for their support in reopening the transplantation program in the Rio Grande Valley. She said, “It has been a humbling privilege to be a part of this and watch this team’s leadership and the guidance of the surgeons and physicians to carry that torch and bring transplant back to the Valley.”

Milton said that it was an honor for her to be part of this celebration, a momentous day for this community. 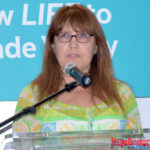 As the celebration continued, Dorothy Starr, the Director of Hospital Services of the Northern Region for the Texas Organ Sharing Alliance also said, “We honor those who have given others a second chance at life.” She continued, “We aim to highlight the extreme need for organ, eye, and tissue donors.”

TOSA is committed to providing organ donation and recovery services to families waiting to donate and to those waiting for a lifesaving transplant.

Starr pointed out that in 2016 Doctor’s Hospital At Renaissance had three individuals who donated and provided nine lifesaving transplants. “At the end of today, 22 people will die because of the lack of organs. But another 78 people from different backgrounds of all ages will receive the transplant which they waited for months or even years,” she stated.

Starr also said that as we all celebrate Donate Life Month to remember the courageous organ donors and the inspiration of hope they provide to those who continue to wait. “Because without these donors there’s no transplant and no second chance. We encourage the community to support the 11,000 Texans awaiting a transplant by signing up to be an organ donor,” she stated.

Dr. Jose Almeda was introduced as one of the heroes and a true visionary in the field of transplantation. Dr. Almeda is the Transplant Director for the Renaissance Transplant Institute. He said, “I appreciate your support and the time and the efforts from all our staff and the hospital administration.”  In addition, he said, “It’s a tremendous undertaking that the hospital and the community and the community leaders have invested into the patients of the Valley.”

Dr. Almeda said that he didn’t really know too much about the Rio Grande Valley even though he is from West Texas. He trained in San Antonio and Los Angeles and that now that he is here, he feels privileged because he says that the patients in the Valley are very appreciative. “They are humble, they’ll do anything for their family, and they’re so grateful,” he stated.

Dr. Almeda said, “We want to do this again. We want to be able to help more patients.” He also asked for help to spread awareness, “We have 300 patients that are knocking on the doors wanting the same thing and we’re trying to get to them all,” he stated.

Castañeda said she feels that Dr. Almeda is a God send, and that everyone appreciates Almeda’s efforts and leadership. 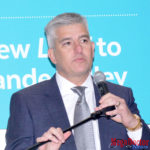 Dr. Robert Martinez, Chief Medical Officer, Chief Physician Executive at Doctors Hospital At Renaissance Health System said, “I want to thank everyone for coming out to celebrate this wonderful milestone, not only for DHR and the physician community here but certainly for South Texas and the Rio Grande Valley.”

He reminded everyone in need of any more information on organ donation or any other questions about transplant, to let them know. “We’re here to answer your questions and hopefully partner to make this dream come true.”

The morning of April 13, 2017 was indeed when DHR’s dreams became reality. Castañeda said, “There’s a lot of gratitude, a lot of emotions today; all good emotions.”

The ceremony concluded with a video that showed some of the staff behind the scenes. Shortly after, Janett the donor, and Gerardo, the organ recipient, participated in a photo session with the physicians. After this, outside the Edinburg Renaissance Conference Center celebrated a balloon release as shown in the photo. MDN 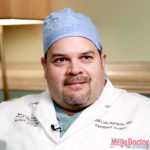 Dr. Almeda Transplant Director for the Renaissance Transplant Institute said, “It was a live donor kidney transplant in which the daughter donated her kidney to her father. A true sign of love, I think. We know that the life expectancy on dialysis is a certain amount of time; it’s not forever. The kidney transplant is the best thing we have, to prolong someone’s life, so it’s a lifesaving operation. DHR is the hospital in the Valley to have stepped up to that plate, to invest the money to make it the best because in the words of one of the entrepreneurs here who we all know very well said, ‘if you’re not going to do it right, don’t do it at all’.” 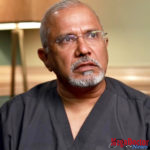 Dr. Phillip Thomas, transplant surgeon. “I think we all recognize live donation as being a heroic act. Society needs heroes because we can’t function without them.” Dr. Phillip Thomas said, “To do a transplant you have to have this concept of a multi-disciplinary approach. It actually involves doctors, nurses, coordinators, social workers, dieticians, respiratory therapists, rehab folks, all working together for a patient, and coming together on a regular basis to deliver that complexity of care.” 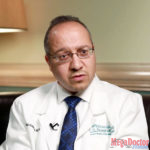 Dr. Mourad Alsabbagh, Transplant Nephrologist. “In the few days after the surgery which is very important, any minute could affect the patient’s kidney survival. The surgeon and I, we round on the patients more than one time a day and we must be sure that the kidney is functioning well, the patient is doing well, and the nurses get enough education on how to manage the patient when the patient is in the hospital. 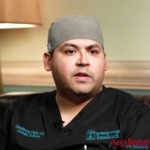 Gaudencio Olgin, MD, Urologic Surgeon, “I feel that DHR has a very strong commitment to the patients and the population in this area. This is the kind of undertaking as far as this type of surgery, the pre-operative care, and the post-operative care that goes along with this is a way of showing how the institution and medicine in general are pushing the boundaries and keeping up with different benchmarks across the country.” 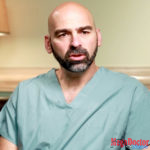 Dr. Greg Abrahamian, Transplant Surgeon at UT Health San Antonio. “To reestablish a kidney transplant program in the Valley is a tremendous benefit to the patients and their families in this region.” 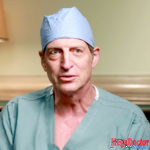 Dr. Glenn Halff, Transplant Surgeon at UT Health San Antonio, “The first kidney transplant at DHR went beautifully. The staff, physicians, surgeons, and hospital leadership here are wonderful and I think this program will create a tremendous opportunity for the community and the Valley.”