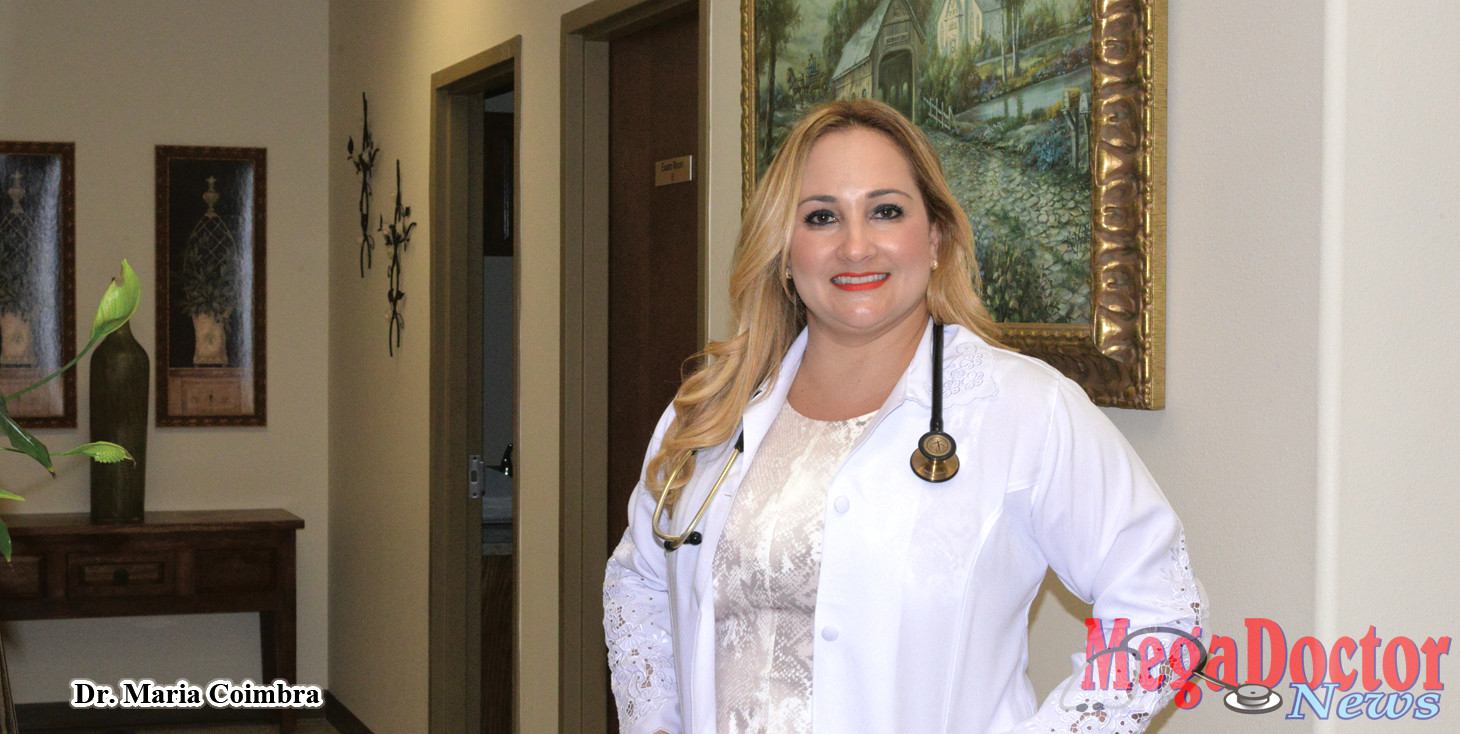 Dedicated to listening, knowing, and caring for her patients

It is not often that Mega Doctor News has had the opportunity to meet a physician about to start a solo practice. In fact, this is a memorable event for anyone that chooses to become independent. Just recently, we met a unique medical professional precisely under those circumstances.

She is Dr. Maria Coimbra, a family medicine physician certified by the American Board of Family Medicine. She was born in Brazil to parents Lidemberg and Beatriz Calado. Her father passed away four years ago.

The impression that you get when you meet Dr. Coimbra is that she is energetic, loves her patients, and is very passionate about what she does. It is easy to see how dedicated she is to her profession.

She achieved her dream of becoming a doctor because she is a determined individual. No matter the challenges she faces, nothing was ever going to stop her from achieving her career goals, and providing for her son as a single mother.

Dr. Coimbra gives the credit for her success to God first, and then to her family who has also had a significant influence on her.

She told Mega Doctor News that her father was a major influence in her life. “He taught me that ‘impossible’ is just a word, and the secret to success is to forget your failures because you are just one step closer to getting it right.”

As she talked about her father, it was easy to picture him as a very strong presence in her life. She says he had a lot to do with creating the foundation for her resolve to accomplish things in life.

She remembers when he told her, “Winners never give up. Perseverance and the will to get out of your comfort zone is necessary to accomplish significant objectives in your life.”

She also admires her mother. “My mother, Beatriz Calado, is a beautiful lady that gave up her career as an educator to dedicate herself to her children,” she said.  Her mother instilled in her the compass of strong moral values, to have respect for herself, and for others. “She has taught me the importance of treating others the way I would like to be treated,” she said.

Dr. Coimbra pointed out that her strong family ties, have made her the woman she is today. But, most importantly she says, “My parents taught me to put God First in everything I do.”

The year 2016 became for her a year of definition, a time of becoming an independent physician. She told Mega Doctor News, “I felt a need for implementing my dreams and ideas about how a family practice clinic should operate.”

The idea didn’t just pop up all of a sudden; this has been her dream all along. Before taking this important step, she knew that first, she needed to get the proper medical school training. Today, after more than 10 years of being in a family medicine practice, she has acquired so much experience.

Dr. Coimbra is a godsend to this area, if you consider her arrival from the perspective that Texas ranks behind nearly every state in the number of physicians per capita*, there is no doubt that this is the case. *A report released 11-15-2015 by Merritt Hawkins, of AMN Healthcare (NYSE: AHS), a leading national physician search company.

Her academic background started in Brazil; in 1987-1993, she earned her Medical Doctor Degree. She did her training in Internal Medicine at Hospital Das Clinicas de Pernambuco from 1993-2000 in Brazil.

In Texas, she did Research at University of Texas Southwestern Medical School in Dallas from 2000-2002. She did her General Surgery Residency at Louisiana State University in Shreveport from 2002-2004 and her Family Practice Residency in McAllen from 2005-2008.

She said, “After ten years of medical practice, I decided that I was ready for the change.” She continued, “I knew that all of this was needed to take the big step as a solo practitioner, but as the leader it is hard to suppress your ideas and philosophies.”

This year, Dr. Coimbra founded Coimbra Family Medical Center, and it is now open to the public at 2108 South “M” Street, Suite 3, in McAllen, Texas.

“My specialty is in the practice of Family Medicine. I take care of all the medical needs of families in the Valley.” She also pointed out, “I have been caring for Valley families since I moved to McAllen in 2005.”

Dr. Coimbra says that family practice doctors are the gatekeepers of medicine. “We are here to be the patient’s advocate, and to diagnose and treat the majority of illnesses,” she stated.

She firmly believes that healing can also come from the will of the patient to get well. “Medication helps but lifestyle modification is fundamental,” she stressed.

During the conversation with Dr. Coimbra, she often glanced at a framed photo of a young man. She said, “My only son, Caetano Coimbra Neto. He is 20 years old and a big motivation in my life.”

The big smile on her face was evidence of the pride she felt of being his mother “He is in college studying pre-med and biology. He dreams of joining me in my practice in a few years. I’m looking forward to that.”

That is why she has so many plans and ideas for the future. “For the time being, I just want to get my new practice going.” She continued, “My biggest challenge now is to get it flowing smoothly, but I am confident because I have a great team.”

Dr. Coimbra said that her professional nurses have worked with her for several years. “I have put together a team with great people skills and it is a great addition to the Valley.”

As you may know, the medical field has gone through significant changes. The implementation of new rules has created challenges for everyone in this area.

In her case, Dr. Coimbra’s primary concerns relate to the way medicine is becoming more and more commercial. “Many doctors don’t care about their patients anymore. They see their patients just as a number and forget that they are human beings suffering from physical and mental problems.” She continued, “We should go back to our basics. I understand we have to pay our bills, but please be sensitive. Remember that tomorrow it could be our family or us,” she stated.

Her approach is different, because as she says, “My inspiration for being a family physician is to care for people.”  Dr. Coimbra’s primary interest is to talk with her patients, to get to know them, and to help care for them with their medical needs.

Dr. Coimbra was attracted to the Valley because of the ‘small town’ feel, but she could see it was growing into a metropolitan area; it was perfect for raising her son.

She says this is great place to enjoy the outdoors. She loves to exercise and do weight training. “I love the beach and traveling, and I like cooking.” She also plays the flute but admits that she has not played in a while.

It is interesting to hear Dr. Coimbra speak, she is a physician who is fluent in three languages, Portuguese, Spanish, and English; and can serve patients from different backgrounds. This talent combined with her passion for medicine, makes her an extraordinary addition to the Valley.

How would you like to be remembered? “A woman of God that dedicated herself to helping others,” she replied.

What message would you like to convey to Mega Doctor News readers? “I always tell my patients that being healthy is a combination of many factors; 1. Keeping a healthy lifestyle; 2. Eating healthy; 3. Exercise; 4. Avoid smoking and drinking alcohol; 5. Sleeping well, at least 6-8 hours a day; and 6. Minimizing the stress of daily life,” Dr. Coimbra finalized.

For her dedication to listening, knowing, and caring for her patients, Mega Doctor News is proud to name Dr. Maria Coimbra as the Mega Doctor for this month. She can be contacted at (956) 992-0660 at the Coimbra Family Medical Center that is now open at 2108 South “M” Street, Suite 3, in McAllen, Texas. MDN