Newswise — AMES, Iowa – More women are drinking alcohol and an Iowa State University research team is working to understand why.

Not only is the gap shrinking between men and women who drink, but ISU researchers found variations in the amount and frequency women drink based on age, race, education, marital status and other factors. Susan Stewart, professor of sociology, says the research compared the experiences of women in their 20s, 30s, 40s and 50s to see how life changes and events influence drinking.

Overall, 52 percent of women reported drinking around seven days in the last month and averaged just over two drinks a day. Stewart; Gloria Jones Johnson, University Professor of sociology; and Cassandra Dorius, assistant professor of human development and family studies, analyzed data from The National Longitudinal Survey of Youth 1979. The survey follows thousands of people starting as teens and into adulthood.

While women still drink less than men, according to the National Survey on Drug Use and Health, there is little evidence to explain their increase in consumption. Stress, social acceptance of alcohol and life changes are often cited as potential factors, but Stewart says this is largely anecdotal. By comparing alcohol consumption across social categories, the researchers want to provide a greater understanding of why women drink as well as dispel some myths.

“Some of our findings really break down stereotypes, such as alcohol use is highest among poor women and underrepresented women,” Stewart said. “We found that not to be true. White women and women with more education and financial means have much higher rates of alcohol consumption.”

Digging into the data

The researchers’ preliminary findings, presented at the American Sociological Association’s Annual Meeting on Aug. 10, found significant differences in drinking by race and ethnicity. The following table provides a comparison among white, black and Hispanic women.

The researchers also noted differences based on social and demographic characteristics:

To expand on these initial findings, Jones Johnson is looking specifically at empty nesters. Preliminary results show significant shifts in alcohol use before and after the last child leaves home. For example, 26 percent of women who were moderate drinkers while their children were home became heavy drinkers after they left.

“This could be due to ‘empty nest syndrome’ – loss of mothering role, depression, isolation – or it could be a newfound freedom from family and childrearing responsibilities,” Jones Johnson said. “To draw definitive conclusions we will compare these women’s alcohol consumption to the alcohol consumption of women not experiencing the empty nest.”

Alcohol is the third-leading preventable cause of death in the U.S., according to the National Institute on Alcohol Abuse and Alcoholism. Approximately 88,000 people die every year from alcohol-related causes, which is more than opioid overdoses (60,000) and motor vehicle crashes (34,000). ISU researchers point to the physical, mental and emotional health issues associated with alcohol use as important reasons for this work.

“After decades of steady increases, women’s life expectancy has leveled off in the last five years partly as a result of increased alcohol consumption,” Dorius said. “As the main caretakers of children, aging parents and extended family members, women’s alcohol use can have lasting effects on the family.” 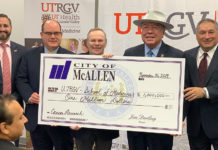 McAllen delivers a $1M check, a promise to support UTRGV School of Medicine