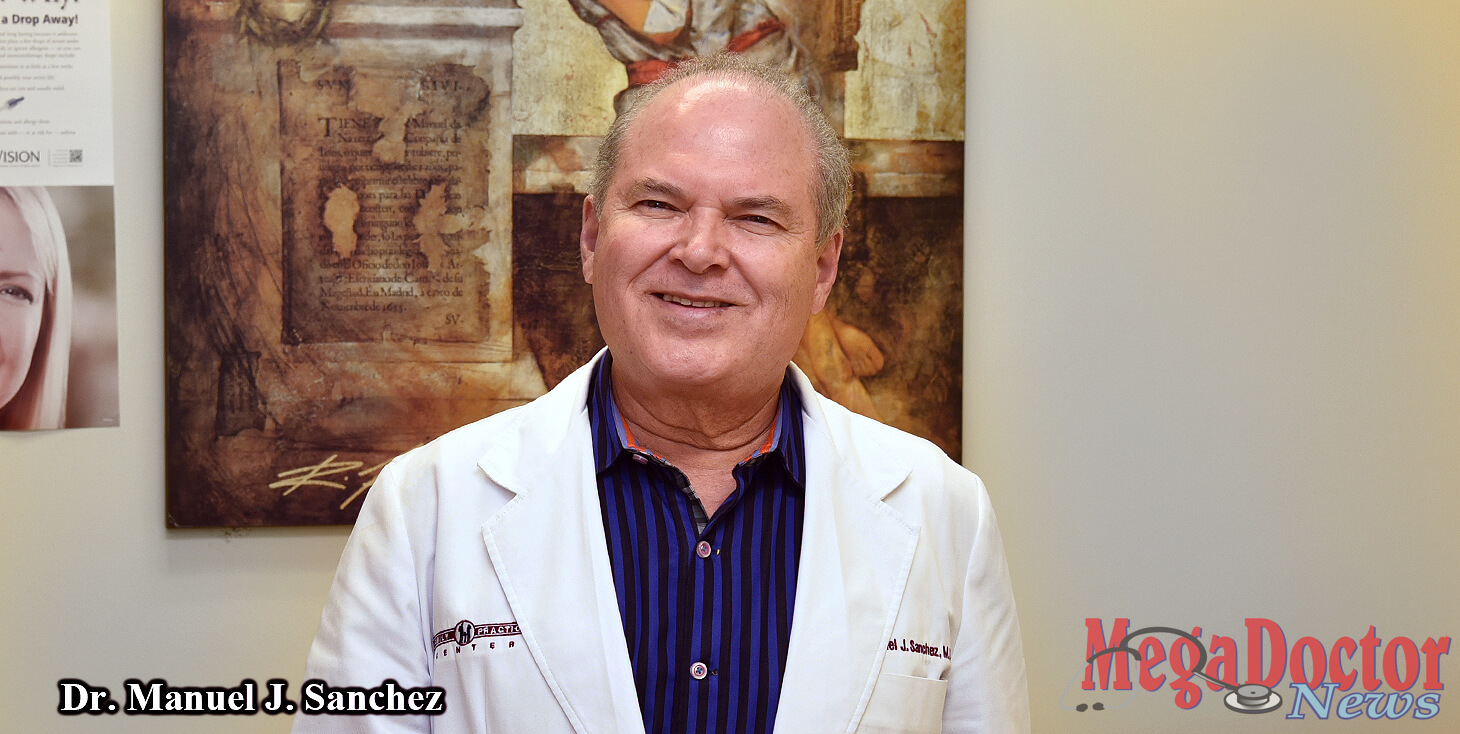 Unfortunately, osteoporosis is becoming a well-known word among families in the Rio Grande Valley. According to Dr. Manuel J. Sanchez, a board-certified Family Practitioner in McAllen who spoke in exclusivity with Mega Doctor News, “This is a dangerous, silent, and degenerative process.”

Dr. Sanchez says that it can be avoided by ensuring a nutrient-rich diet and most importantly an adequate calcium intake. He also warns that a diet lacking in proper nutrition, such as severe weight-loss diets and eating disorders, could also be the fuel for osteoporosis.

“Osteoporosis is an interesting process.” He said, “We call it a disease, but in essence, it’s a degenerative process that occurs in many people, not everybody, but most people. We start losing bone mass as we get older, because of calcium deficiency and our bones become more porous and less dense.”

There are many ways of explaining the porosity of the bones, a simple one is that the trabeculae (walls) of your bones, that hold up the weight of your body, are deteriorating; the bones get weak and this creates a higher risk for bone fractures or broken bones.

Dr. Sanchez stated that when the disease is in an advanced state, the bones lose strength. The vertebras of the spine, the lumbar and thoracic bones are more commonly affected. The characteristics of osteoporosis disease are low bone mass and loss of bone tissue that may lead to weak and fragile bones.

According to statistics currently available, the majority of people with osteoporosis are women and people older than 60 years of age. He said, “One in two women and one in eight men are predicted to have an osteoporosis-related fracture in their lifetime.”

Dr. Sanchez says that the largest group of people at risk of osteoporosis is women age 50 and over. Secondly, are those people that are thin and petite, like Asian, and Mexican-Indian. “Caucasians are also susceptible; because of hereditary risks. They don’t have a lot of bone mass,” he said.

“Also, being a female has a lot more risk of developing osteoporosis than men. Of course, men do get it, but it’s more common in women.”

Dr. Sanchez said there are controllable factors like our habits. “People that are sedentary and don’t exercise, they get osteoporosis easier. The diet has something to do with it, people who don’t get enough vitamin D and calcium in their diet are more susceptible to having osteoporosis.”

He explained that other factors can help to avoid or delay the progression of the disease, like making sure you have an adequate level of vitamin D. Engaging in physical motion that is regular weight-bearing activity is important to maintain the bones density. It can be either low-impact or high-impact exercise. Also, it is important to avoid heavy drinking, and smoking, and a sedentary lifestyle.

Dr. Sanchez also pointed out that certain diseases can make you more likely to get osteoporosis, like thyroid disease. “Also, people who have seizures and take Dilantin and anticonvulsants; these can promote osteoporosis. They promote calcium loss.” He continued, “The same thing as steroids, like cortisone, causes a loss of calcium.”

In a more technical term, he said, “Osteoporosis occurs when there is an imbalance between new bone formation and old bone resorption.” He said that the body may fail to form enough new bone, or too much old bone may be reabsorbed, or maybe both. “Some essential minerals to watch for normal bone formation are calcium, magnesium, boron, and decreased amount of phosphates.”

Dr. Sanchez is a seasoned physician who participates in continuing education and training; he is always learning about his field. Being a family practitioner, he wants to be there for his patients, always ready.

Dr. Sanchez also has a message for those that live sedentarily. “Yes,” he said, “People who don’t exercise, the couch potatoes, develop it a lot more.” This degenerative disease can even be a problem for vegetarians because he says if they don’t get enough calcium, they could also have a problem.

He said, “We get calcium from milk. Milk has the most calcium, and meat does too.”

You have learned a lot about osteoporosis, it’s widespread in women after menopause, that’s when they are more likely to develop osteoporosis.

How do people find out if they suffer from osteoporosis?

Dr. Sanchez: “Normally people don’t know they have osteoporosis until they have a fracture, so that’s why it’s important to get physical exams. Early examination, it’s like with breast cancer, they do mammograms. You don’t feel anything until your tumor is big enough to feel it, and then you have a situation.”

When people have lost 20 to 25% of bone mass, then it becomes osteoporosis. “Before that time, is the best time to treat someone.”

How do you treat people with osteoporosis?

Dr. Sanchez: “We treat it with medication, and there are hormones for it as well, depending on how advanced it is. If you already have a fracture, the treatment is going to be different, but the basic treatment that we give for everybody includes calcium replacement therapy, and vitamin D, we need enough vitamin D.” He said that sometimes people take very little vitamin D and he recommends four or five thousand units of vitamin D every day or more, depending on the level of the vitamin in their body.

How do you get more vitamin D?

Dr. Sanchez: “You can buy it in a supplement form. You get it from the sun, but people aren’t going to be in the sun enough to produce that quantity. And when you get older, you can’t produce it anyway, even if you’re under the sun. When you’re young, you can produce everything really nicely, but when you are older, that’s another story.”

Can you buy vitamin D over the counter?

Dr. Sanchez: “Yes, it is readily available over-the-counter.” Aside from this, he said it is important to include healthy choices of foods that provide vitamin D in your diet. He advises to get enough calcium and vitamin D, and once again, he emphasized that it is important for people to exercise, to walk, run, or just jog. “Anything that is a weight-bearing exercise.” Dr. Sanchez also recommends checking your hormones, beginning in your late 30s, because osteoporosis takes a long time to develop.

His message for men is to get tested, and if testosterone is high, then there is no problem. “But if it’s low, we start replacing it to make it normal,” he said.

I have learned a lot speaking with Dr. Sanchez. Regarding the nutritious food that he was talking about, his favorite meal is salmon. “Salmon, because it has a lot of vitamin D, and it has a lot of fish oil.” He said, “As far as I know, of the studies that we do in anti-aging, it’s the only meat that has “anti-aging” properties because it is anti-inflammatory.”

He said that, in general, most meat can cause inflammation. When you eat pork, beef, chicken, and especially barbecue, all of that produces inflammation because of the fat content. “Salmon does not, it decreases inflammation in your body. And we know that even heart attacks have to do with inflammation now. Inflammation causes a lot of the diseases that we have,” he said.

How do you diagnose osteoporosis?

Dr. Sanchez: “We diagnose osteoporosis with an in-house machine called the DEXA Scan. It consists of two tiny rays that come out from the machine. It is very safe, it does not require any special walls or any special clothing or anything; it is not harmful. It’s a very small, tiny dose. It measures the density of the bone. It gives a report that tells us how much bone mass has been lost and what is left. The report gives a score, the T-score.

Normal would be zero?”

He continued, “Zero, maybe -0.1 or something like that, but as it becomes a -1.0 that’s osteopenia, -2.0 is more severe osteopenia. When it goes up to a T-score of -2.5, it’s called osteoporosis, and basically, it correlates to the percentage of bone loss, so when you developed a 25% bone loss it is osteoporosis.”

Dr. Sanchez says that his goal is to provide the best treatment possible to maintain a healthy level of vitamin D in the body. Maintaining an adequate level can help to prevent osteoporosis, and the risk of falls, and fractures of the bones, and the problems associated with that. 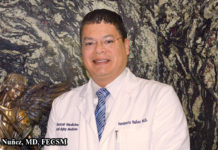 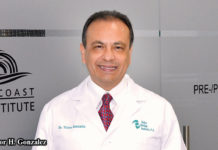 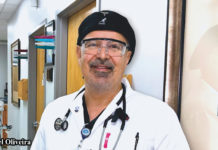 Dr. Noel Oliveira, a Pioneer in Caring for Wounds that Do Not Heal