The National Institutes of Health (NIH) is on a quest to develop a vaccine that could provide long-term immunity to all types of the flu. This year up to 36 million people have gotten the flu, about 500,000 have been hospitalized for the flu, and there’ve been up to 46,800 deaths since October 2018, according to the Centers for Disease Control and Prevention (CDC). While this vaccine will hopefully provide us with long-lasting protection against many types of the flu, it probably won’t eliminate the flu entirely, health experts predict. Source: Healthline

Vegetarians who take the dietary supplement creatine may enjoy improved brain function, according to a new study. The research will be presented at the American Physiological Society’s (APS) annual meeting at Experimental Biology 2019 in Orlando, Fla. Creatine is a chemical stored in the muscles and brain that helps build lean muscle. In addition to being produced by the human body, creatine is also naturally occurring in red meats and seafood—and in smaller amounts, dairy products. People who do not eat animal products generally have lower creatine levels in the brain than those who consume meat. Source: Newswise

Consuming garlic helps counteract age-related changes in gut bacteria associated with memory problems, according to a new study conducted with mice. The benefit comes from allyl sulfide, a compound in garlic known for its health benefits. “Our findings suggest that dietary administration of garlic containing allyl sulfide could help maintain healthy gut microorganisms and improve cognitive health in the elderly,” said Jyotirmaya Behera, Ph.D., who the research team with Neetu Tyagi, Ph.D., both from of Louisville. Source: Science Daily

Sunscreen Use Could Lead to Better Blood Vessel Health

A new study suggests that sunscreen protects the skin’s blood vessel function from harmful ultraviolet radiation (UVR) exposure by protecting dilation of the blood vessels. Perspiration on the skin may also provide protection to the skin’s blood vessels from sun damage. The findings will be presented today at the American Physiological Society’s (APS) annual meeting at Experimental Biology 2019 in Orlando, Fla. Source: Newswise

A new study found that offspring born to mice that exercised during pregnancy were less likely to gain weight after consuming a high-fat diet later in life. Although previous studies have shown that exercise by obese females benefits their offspring, this is the first research to demonstrate that the same is true when non-obese females exercise. “Based on our findings, we recommend that women—whether or not they are obese or have diabetes—exercise regularly during pregnancy because it benefits their children’s metabolic health,” said Jun Seok Son, a doctoral student at the Washington State University who conducted the study. Source: Newswise

Everyone is born, Bonnie Roupé told INSIDER, so an app for pregnant women actually has the potential to involve every person in the world.  founded by Roupé in 2012, works like a virtual midwife, supplying users with information about how their baby is growing, and what the changes in their body mean. Source: Business Insider

Aneurysms are the weakening, or bulging, of blood vessels that can rupture and become life-threatening. And although they can happen anywhere in the body, aneurysms most commonly occur in the brain, or in the main vessels that lead to the heart, legs and arms. For decades, many have considered aneurysms a death sentence, but thanks to innovative, minimally invasive procedures, many can be treated before they become critical. Source: Newswise

Recent research found that involvement in team sports was correlated with a larger hippocampal volume (the area of the brain responsible for processing of long-term memory and emotional responses) in both boys and girls. This is important because adult depression has actually been linked to a shrinking hippocampus in other studies. Source: Healthline 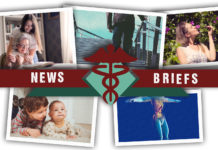 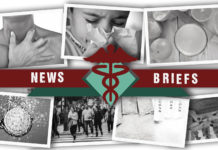 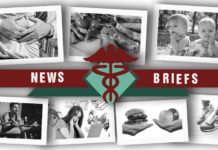