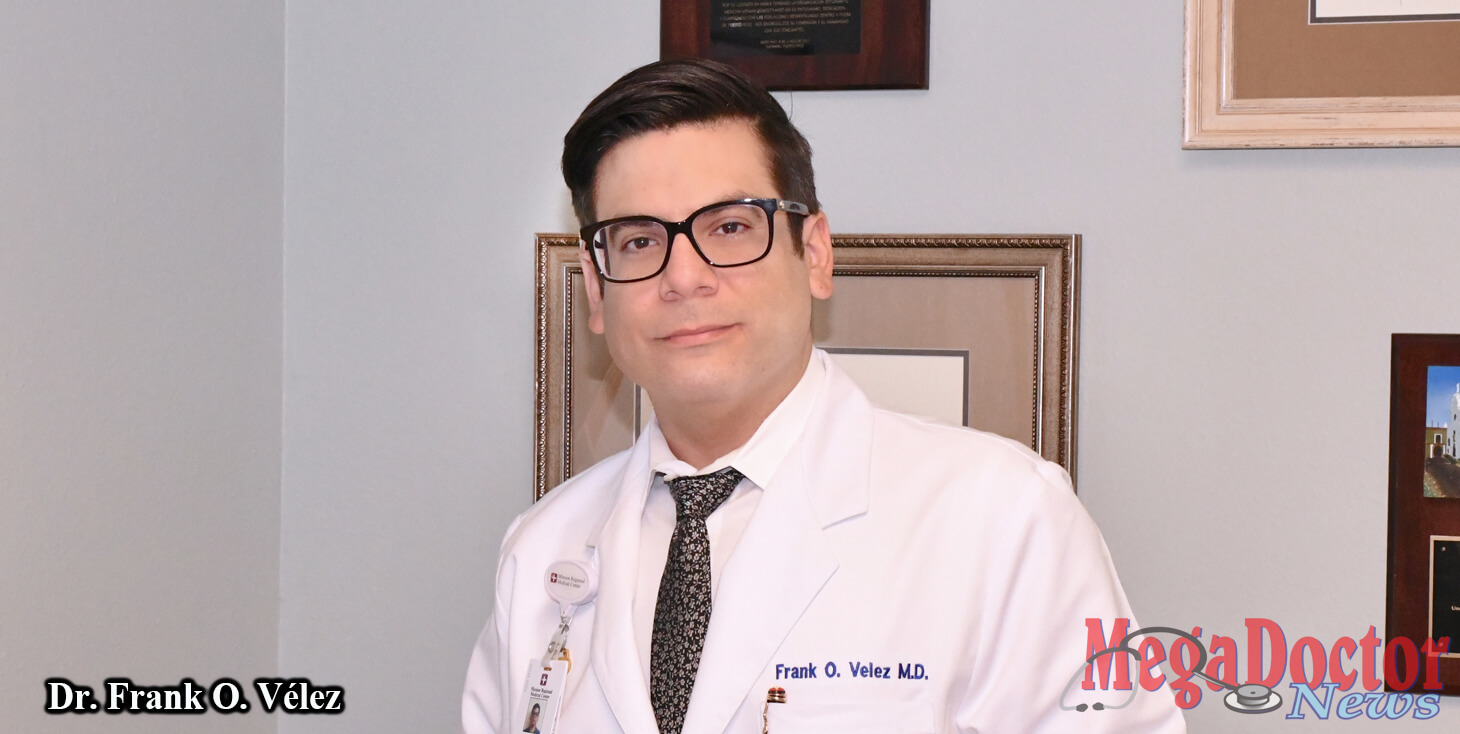 As originally published in Mega Doctor News newsprint edition May 2019

A few weeks ago, Dr. Frank Omar Vélez, a general surgeon with noncardiac thoracic surgery training, moved his practice to the Rio Grande Valley. Originally from Puerto Rico, he trained for seven years in in the state of Florida. Before making it to the Valley, Dr. Vélez was invited to practice medicine in the Island of Puerto Rico. He had practiced medicine there for about 8 months when he decided to move to Mission, Texas.

Overall, he has been a practicing physician for close to a year; he comes with extensive training in the fields of general, and noncardiac thoracic surgery. “This would be beside my busy training.” He said, “I was at a large referral center from Central and South Florida. So, we used to get a lot of patients from all over the state.”

Being the son of a military physician, he spent 4 years living with his dad while he was stationed in El Paso, Texas. Later, he moved to Puerto Rico with his mother. His father is an anesthesiologist now in Daytona Beach, Florida. “My father and I are pretty close, and we see each other a couple of times a year. He is planning to visit in July; he loves Texas,” Dr. Vélez said.

For Dr. Vélez, this is his first time in the Valley. However, he had heard about this area through a Chief of Residents, while he was training. Dr. Jesus Rendon, who is now a trauma surgeon and was his superior while Dr. Vélez was an intern seven years ago, invited him to come the McAllen/Mission area upon graduation. He said that Dr. Rendon always recommended that he keep in touch, so they used to talk once or twice a year.

Dr. Vélez came to this area because his wife, Lesly Vélez, found that there was a general surgery position available with Drs. Marquez and Villarreal. The next step was for them to fly down for an interview in Mission.

He has a very positive opinion of the Valley. “Everyone has been very welcoming, and the patients are appreciative. It’s not impersonal like in a big city, and it has everything to raise a family. My daughter, Valentina Vélez loves to go to parks, and we’ve been taking her here and there; we have really been enjoying it. I think it’s going to be great.”

He also said, “The population of the area is young, and there is a lot of people moving here.” He pointed out that while researching the area he was analyzing demographic reports.  “Besides that, I am a big fan of Mexican food, there are a lot of Taco trucks everywhere.”

His wife, Lesly is also from Puerto Rico. However, she was young when she moved to the states. He said that Lesly, who is a nurse practitioner, has been living here for 20 years. “Although she returned with me to Puerto Rico. She couldn’t work there because there were no nurse practitioner jobs over there,” he said. “They are an invaluable element in the health care system and complement the medical doctors in providing excellent care.  As the medical crisis worsens in Puerto Rico, legislators must approve the designation of nurse practitioners in the understaffed medical centers.”

Dr. Vélez is aware of South Padre Island and is planning a visit. In the meantime, they have already taken their two-year-old daughter Valentina to the Brownsville Zoo. “My daughter loves animals and sea life. So, we enjoy it over there. It was pretty nice.”

He told Mega Doctor News that moving to Texas was no problem, but when he moved from Florida to Puerto Rico that was another story. “It was challenging and there was a lot of bureaucracy. I spent about three months without working, I was just waiting for the paperwork.” He said, “Moving from Puerto Rico to Mission was extraordinarily smooth.”

Dr. Vélez said that what excites him about his profession is taking care of his patients. He gets involved one hundred percent, day in, day out. He explained that while in Tampa, he got extensive training. It was where he saw an opportunity to train in an area of medicine that most residents didn’t want, it was noncardiac thoracic surgery.

“I had the chance to slowly start getting more experience on thoracic surgery, especially with lung cancer and lung malignancies.” He said, “I started to switch with the other residents and from the rotation that is usually one month in five years, I ended up doing 12 months or almost a year in this field.”

He also had the opportunity to travel to Australia and be part of the International Cancer Association Committee and a Congress. He also went to multiple clinical robotics forums in Chicago and California, where he met other minimally invasive surgeons. “Even though I didn’t do a formal cardiothoracic fellowship because of time, I’m trained and prepared to take care of patients with thoracic diseases and incorporate minimally invasive techniques in their management.” During his short stay in Puerto Rico, he started a lung cancer screening program and got the local television station involved in the effort. “That helped me to reach a lot of people that had a question on the subject.”

Dr. Vélez is one physician who likes to give back to the community. He formed an organization called “Medicina Urbana” (Urban Medicine) to offer services free of charge to segments of the population with less means for healthcare. Once he is totally assimilated to the area, he plans to get involved in associations to provide care to the underserved areas in Mission.

He also said that there are not enough cardio thoracic surgeons; around here, they are swamped taking care of cardiovascular diseases.  “It will be an honor to help these patients and provide exceptional care to this community,” he added.

Dr. Vélez says the inspiration for him to become a doctor is that his father is in this profession, and his aunts were all nurses. “Also, when I was growing up, we used to participate in the care of my great grandmother. She had suffered a stroke and was bed-ridden.”  He said, “Even as children, we helped with the tube feeding through the PEG tube.”

He was also inspired to become a doctor based on the fact that he comes from an underserved area of Puerto Rico.  “I’m from an area where it’s hard for people to be able to get out to better themselves.  It is not because they don’t want to, it’s just because everything is against them,” he said.

He remembers hearing about so many projects presented by the government about helping people, but at the end of the day, he says, there was no help. He said he will never forget those experiences, and that is why he has great admiration for the health care professionals, and the providers for what they do.

By doing community work, he has been recognized in Puerto Rico for all his efforts. He says that he doesn’t do it for recognition, this is something that he loves to do. “That is why I will use everything I learned throughout my years in Puerto Rico, and create similar community programs in the Valley, like the ones I was part of,” Dr. Vélez finalized.