People looking for FluMist as an alternative to the injected flu shot are likely going to have a hard time finding it this fall. AstraZeneca, which makes FluMist, said it had a lower-than-expected yield when it produced the viruses needed for two of the four components in the vaccine.

The company has shipped only three lots to the U.S. market, a fraction of the number it supplied in some earlier seasons. Pediatricians in Canada and Israel have been told they will have no FluMist this year.

It’s a disappointing turn of events for a vaccine that has been going through a rough patch, after U.S. studies a few years back questioned whether the vaccine was working. The company has since made changes to FluMist that seem to have resolved the problem. 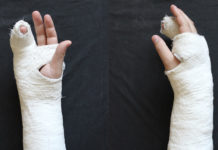 Recovering from a Broken Bone

Recovering from a Broken Bone